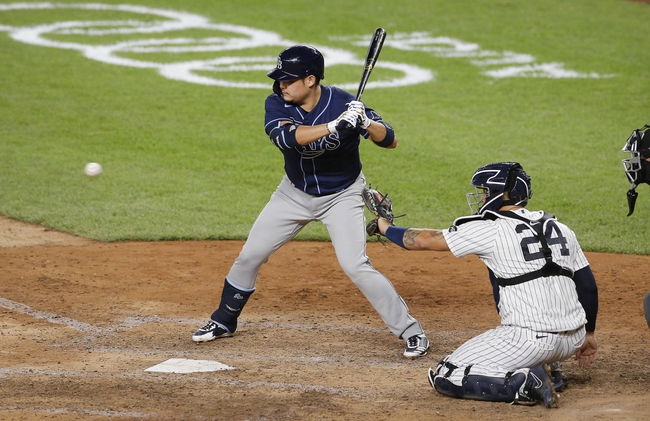 TV: YES, FS SUN Stream the MLB Game of the Day all season on ESPN+. Sign up now!

The Tampa Bay Rays and the New York Yankees meet in an AL East division matchup in MLB action from Yankee Stadium on Wednesday.

The Tampa Bay Rays will look to build off of a 6-3 win over the Yankees from Tuesday night. Brandon Lowe led the way with a three-run home run while Austin Meadows had a solo homer and Michael Perez added an RBI as well in the winning effort. Kevin Kiermaier went 2 for 4 with a triple and a double while Joey Wendle and Willy Adames each added a base knock as well to finish off Tampa Bay’s offense as a team in the win. Blake Snell got the win to improve to 2-0 on the year after allowing all three runs on four hits while striking out three over five innings of work. Chaz Roe closed out the 9th for his 1st save of the year. Tyler Glasnow will start this one and is 0-1 with a 7.04 ERA and 27 strikeouts this season. In his career, Glasnow is 0-2 with a 5.68 ERA against the Yankees.

The New York Yankees will try to bounce back after their loss to the Rays on Tuesday. All of New York damage on the board came via the long ball as Luke Voit had a two-run home run while Gary Sanchez added a solo homer. Clint Frazier, Miguel Andujar and Thairo Estrada each had base hits as well as the Yankees had just five hits as a team in the losing effort. Masahiro Tanaka took the loss, falling to 0-1 after allowing five earned runs on eight hits over four innings of work. Gerrit Cole will start here and is 4-0 with a 2.76 ERA and 34 strikeouts this season. In his career, Cole is 0-2 with a 3.86 ERA and 47 strikeouts against Tampa Bay.

Glasnow had been one of Tampa Bay’s better pitchers and the Rays have a shot here as they’ve been the only thing standing between Gerrit Cole and a perfect 5-0 record so far this season. However, Cole’s just on another level right now and the Yankee bats don’t stay quiet for long when they don’t show up on any given night. I’ll back the Yankees here and to get the juice down with Cole on the bump, give me the Yankees on the run line.