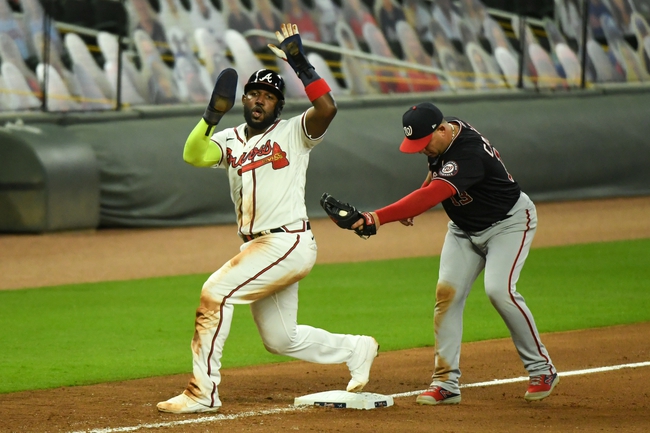 TV: MAS2, FSSO Stream the MLB Game of the Day all season on ESPN+. Sign up now!

The Washington Nationals and the Atlanta Braves meet Friday in MLB action from SunTrust Park.

This will be game one of a Friday doubleheader between these teams, and the first installment of a four-game weekend series. The Nationals are coming off a quartet against the Phillies. Washington dropped the first three games there 8-6, 6-0 and 3-0. In the Thursday game, Washington had a slim 5-4 lead going into the bottom of the eighth but fell in extra innings 6-5. As for the Braves, they played the Red Sox this week. Atlanta swept that set with wins 6-3, 10-3 and 7-5. Check back all season long for free MLB picks and MLB predictions at Sports Chat Place.

The Nationals had 10 hits in the Thursday loss, but couldn’t hold on to a slim lead. The good news is that there were some offensive standouts like Trea Turner, who posted a three-run homer and three hits. Juan Soto chipped in two hits and an RBI as well. Starter Anibal Sanchez gave up four runs (one earned) on eight hits in 3.1 innings with one walk and one strikeout.

Over on the Braves’ side, they’ve won four straight and have showcased some nice offense. Leading the way for Atlanta is Marcell Ozuna, with 12 homers, 31 RBI, a .301 batting average and 23 runs to his credit. Freddie Freeman is also having a nice campaign on a .317 average, 40 hits, 29 runs, five homers and 22 RBI so far.

The Nationals are 7-0 in their last seven opening games of a doubleheader and 7-1 in their last eight road games versus a left-handed starter. Washington is 1-4 in their last five during game one of a series and 0-6 in the last six overall.

Pick: I’m leaning Braves. In order for Atlanta to get a win here though, Milone is going to have to have a better outing obviously. He posted just seven outs on Sunday after being acquired from Baltimore. I’m confident Milone can bounce back here; he’s a better pitcher than that. If Atlanta’s offense can manage a handful of support runs, I don’t think they’ll have too many issues with the struggling Nationals in game one here.