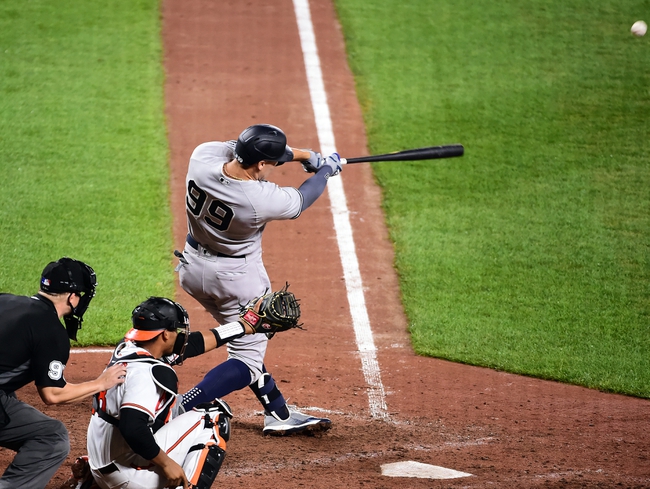 The New York Yankees and the Baltimore Orioles meet in an AL East division matchup in MLB action from Camden Yards on Friday afternoon.

The New York Yankees will look to bounce back from a 9-7 extra innings loss to the Mets last time out. Luke Voit led the way with two RBIs including a double while Brett Gardner and DJ LeMahieu each had a double and an RBI as well. Aaron Hicks, Gio Urshela and Tyler Wade each had RBIs as well to finish off New York’s scoring as a team in the loss with Urshela going 2 for 4 at the dish in the loss. Kyle Higashioka added a base hit as well in the defeat for the Bronx Bombers. J. A. Happ allowed four earned runs on eight hits while striking out four over five innings of work, not factoring in the decision. Albert Abreu took the loss in relief, falling to 0-1 on the year. Deivi Garcia is expected to start here and is 0-0 with a 0.00 ERA and 6 strikeouts this season. This will be Garcia’s first career start against Baltimore.

The Baltimore Orioles will try to bounce back from a 9-4 loss to the same Mets in their last game. Ryan Mountcastle and Cedric Mullins each had an RBI while Jose Iglesias and Pat Valaika each had two hits in the losing effort. Pedro Severino contributed a triple for the O’s while Rio Ruiz and Andrew Velazquez each had a base hit to cap off Baltimore’s team offense in the losing effort. John Means took the loss, falling to 0-3 on the year after allowing four runs on eight hits over 5.1 innings of work. Alex Cobb will start here and is 1-3 with a 4.33 ERA and 24 strikeouts this season. In his career, Cobb is 7-4 with a 2.92 ERA and 81 strikeouts against the Yankees.

Call me crazy, but I think I’m going to lean towards Baltimore here. Garcia had a solid start but it was in the second half of a double-header, so guys that played the first half could’ve been resting and it’s just hard to really get a gauge on what Garcia can really put forth. On the other hand, Baltimore’s already exceeded expectations for the year if we’re being honest and Alex Cobb’s not only been Baltimore’s best arm, he’s had success against the Yankees in his career. I just think the Yankees are free falling right now and while it won’t take much to get them out of that funk, I’ll start to believe it when I see it. Give me the Orioles in this one.

Chris’s Pick Baltimore Orioles (will update with odds once released)