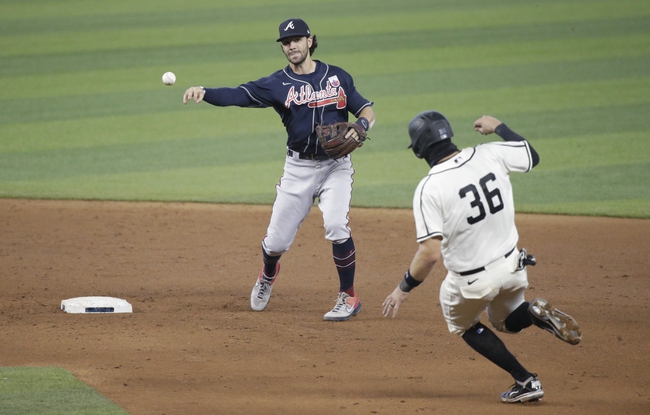 The Miami Marlins and the Atlanta Braves meet in an NL East division matchup in MLB action from Truist Park on Monday afternoon.

The Miami Marlins will look to rebound from a tough 5-4 loss to the Tampa Bay Rays in their last outing. Starling Marte led the charge for the Fish with a two-run home run while Jesus Aguilar and Matt Joyce each had an RBI to round out the scoring for Miami in the loss. Corey Dickerson had a triple and Lewin Diaz had a double while Brian Anderson and Jazz Chisholm each had a base hit to finish off the offense for Miami in the losing effort. Trevor Rogers allowed three runs on four hits while striking out ten over six innings of work, not factoring in the decision. Brandon Kintzler took the loss in relief, falling to 1-3 on the year as a result. Jose Urena will make his season debut here after going 4-10 with a 5.21 ERA and 62 strikeouts last season. In his career, Urena is 2-8 with a 6.64 ERA and 40 strikeouts against Atlanta.

The Atlanta Braves will try to build on their 10-3 beatdown win over the Washington Nationals last time out. Freddie Freeman and Marcell Ozuna each had four RBIs with Freeman belting a grand slam while Ozuna went 3 for 4 with a home run and a double. Tyler Flowers went 2 for 4 with a pair of doubles and two RBIs to finish off the scoring for the Braves in the winning effort. Adeiny Hechavarria and Dansby Swanson each had two hits while Adam Duvall had a double. Ronald Acuna Jr. and Austin Riley each had a base hit to finish off the scoring for the Braves in victory. Josh Tomlin got the win to improve to 2-2 on the year after allowing one run on three hits while striking out a pair over six innings of work. Ian Anderson will start here and is 2-0 with a 2.25 ERA and 14 strikeouts this season. This will be Anderson’s first career start against Miami.

It’ll be interesting to see what Urena does in his first start of the year, but gone are the days when Urena was considered Miami’s best pitcher. He’s been bypassed in the rotation and you have to kind of feel bad for the guy as he just hasn’t caught many breaks in his career. Ian Anderson’s looked solid in his first two starts and Urena’s had no success in his career against the Braves. Give me Atlanta on the run line here.