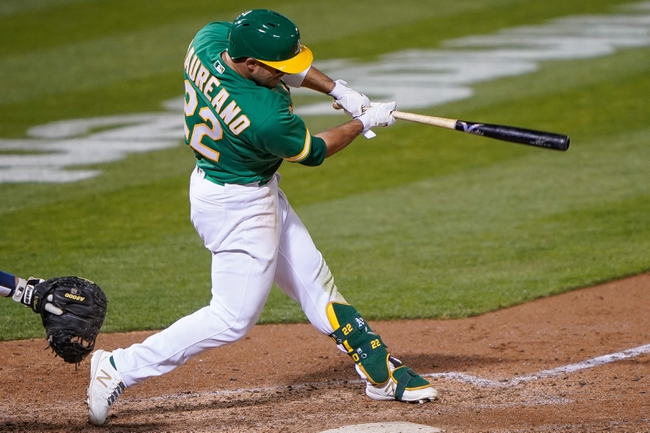 TV: NBCSCA, ATTH Stream the MLB Game of the Day all season on ESPN+. Sign up now!

The Houston Astros and the Oakland A’s meet in an AL West division matchup in MLB action on Wednesday.

The Houston Astros will look to build on a split of the double-header on Tuesday, losing game one by a final score of 4-2, but following that up with a 5-4 win in game two of the double dip. In game one, Michael Brantley went 3 for 3 with a home run and two doubles while accounting for both of Houston’s RBIs in the losing effort while Kyle Tucker had a double as well. Game two saw five different Astros all log an RBI with Brantley going 2 for 3 with a double as well in the victory. Zack Greinke took the loss on the mound in game one after giving up four earned runs with six strikeouts in six innings of work. Enoli Paredes got the win in game two in what ended up being a bullpen game for the Astros. Luis Garcia will start here and is 0-1 with a 3.38 ERA and 12 strikeouts this season. This will be Garcia’s first career start against Oakland.

The Oakland A’s will look to build off of the split of the doubleheader on Tuesday. In game one, Khris Davis went 2 for 3 with a solo home run, a double and two RBIs while Ramon Laureano had a double and an RBI. Robbie Grossman had an RBI and Chad Pinder added a double as well. In game two, Matt Olson had a three-run home run while Tony Kemp added an RBI to finish off the scoring and Vimael Machin had a double as well. Frankie Montas got the win on the mound in game one after allowing just two earned runs with 4 strikeouts over five innings of work and J.B. Wendelken took the loss in game two in relief. Jesus Luzardo will start here and is 2-2 with a 4.23 ERA and 38 strikeouts this season. This will be Luzardo’s second career start against Houston.

I’m not really crazy about Luzardo to begin with for the A’s, as he’s allowed three runs or more in three of his last four starts and while Garcia’s been serviceable as a reliever, there was a double-header yesterday with a bullpen game so I’m not sure how long Garcia’s going to be able to before getting rocked, pulled or both. I think this is a game where the pitching matchup is a wash, so give me the over as I think we see double-digit runs here.