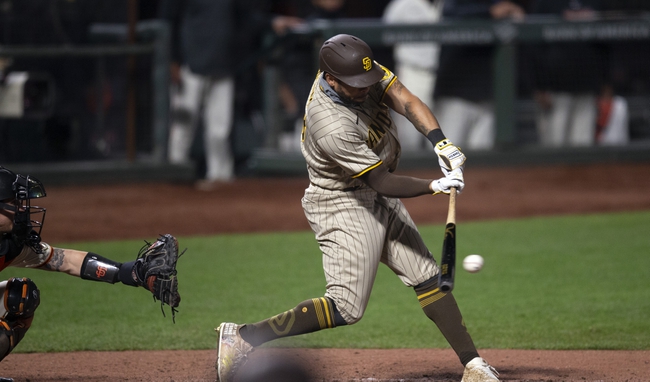 TV: FSSD, NBCSBA Stream the MLB Game of the Day all season on ESPN+. Sign up now!

The San Francisco Giants and the San Diego Padres meet in an NL West division clash in MLB action from Petco Park on Thursday.

The San Francisco Giants will look to build off of a 10-1 win over Seattle in their last outing. Mike Yastrzemski and Evan Longoria each had three RBIs with Yastrzemski belting a three-run home run. Alex Dickerson, Wilmer Flores, Brandon Belt and Joey Bart each had an RBI to make up San Francisco’s scoring as a team in the win with Flores going 2 for 3 with a pair of doubles. Darin Ruf added a double while Brandon Crawford and Mauricio Dubon each chipped in a base hit to finish off San Fran’s offense with Dubon going 2 for 4 at the dish. Tyler Anderson got the win to improve to 2-3 on the year after throwing six shutout innings, giving up just three hits while striking out four on the way to the win. The Giants didn’t have a starting pitcher announced at the time of posting.

The San Diego Padres will look to build off of a 5-3 win over the Colorado Rockies on Wednesday. Mitch Moreland led the way with a two-run home run while Wil Myers had a triple, a double and an RBI. Jake Cronenworth and Austin Nola each had an RBI to finish off the scoring for the Padres in the win. Manny Machado added a double and Trent Grisham had a base hit as well to cap off San Diego’s offense as a team in the winning effort. Zach Davies got the win to improve to 7-2 on the year after allowing three runs on five hits while striking out eight over six innings of work. Trevor Rosenthal got the save, his 2nd of the year. Chris Paddack is expected to start here and is 3-4 with a 4.75 ERA and 48 strikeouts this season. In his career, Paddack is 1-0 with a 2.86 ERA and 27 strikeouts against San Francisco.

I’m really tempted by the plus money as the Giants are playing well in their own right and Chris Paddack hasn’t been pitching like a guy that should be this heavily favored, even with the Padres’ bats behind him. On the other hand, the Padres have been swinging the bat really well and Cahill has been dealing with a hip issue and that could leave the door open for Drew Smyly as a long reliever, and I’m not a Smyly fan to say the least. Instead, I’m going to side with the over. I think both offenses end up plating a few runs here and this total soars over the number when all is said and done. Give me the over here.