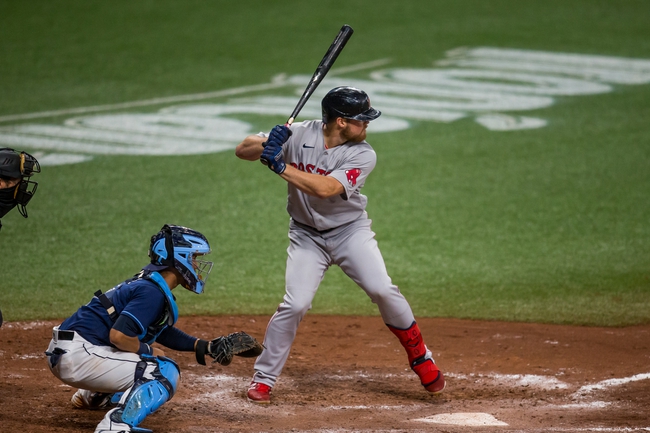 TV: FS SUN, NESN Stream the MLB Game of the Day all season on ESPN+. Sign up now!

The Boston Red Sox and the Tampa Bay Rays meet in an AL East division matchup in MLB action from Tropicana Field on Sunday.

The Boston Red Sox will look to rebound after a 5-4 loss to the Rays on Saturday night. Christian Arroyo led the charge with a two-run home run while Michael Chavis added a solo shot and Kevin Plawecki had an RBI to finish off the scoring for the Red Sox in the losing effort. Yairo Munoz had a double while Jackie Bradley Jr., Rafael Devers and Alex Verdugo each had a base knock to finish off Boston’s offense as a team in the loss. Nathan Eovaldi allowed an earned run on three hits while striking out four over three innings of work, not factoring in the decision. Marcus Walden took the loss, falling to 0-2 on the year as a result. Martin Perez will start here and is 2-4 with a 4.40 ERA and 31 strikeouts this season. In his career, Perez is 1-5 with a 5.81 ERA and 47 strikeouts against Tampa Bay.

The Tampa Bay Rays will look to build on their win over the Red Sox from Saturday. Manuel Margot went 2 for 3 with a double and two RBIs while Austin Meadows and Brandon Lowe each had a solo home run and Nate Lowe added an RBI as well to cap off Tampa Bay’s scoring as a team in the victory. Joey Wendle and Ji-Man Choi each had a base hit as well to cap off Tampa’s offense as a whole in the winning effort. Tyler Glasnow got the win to improve to 3-1 on the year after allowing four earned runs on six hits while striking out seven over seven innings of work. Diego Castillo closed out the 9th for his 4th save of the season. Charlie Morton will start here and is 1-2 with a 4.94 ERA and 24 strikeouts this season. In his career, Morton is 6-1 with a 3.83 ERA and 60 strikeouts against Boston.

The Red Sox have been god awful this season, it’s not a secret. Charlie Morton’s also been banged up, also not a secret. But the Red Sox have been getting close here and there to getting some victories, they just haven’t gotten the bounces that a team like Tampa’s been getting and I think this is a chance for the Red Sox to get one back as Perez has pitched well against the Rays this season and I’m not fully convinced that Morton’s 100% coming into this start. I’ll take a shot with Boston and the plus money here.