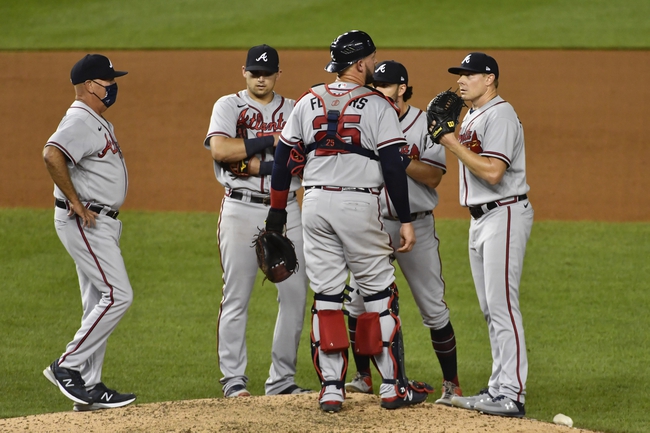 The Atlanta Braves and the Washington Nationals meet Sunday in MLB action from Nationals Park.

This will be the final installment of a four-game set between these teams over the weekend. The Braves won Thursday, and the Nationals got a win Friday. In the Saturday game three, the Braves were able to cobble together a couple of runs in the first four innings and hang on for a tense 2-1 victory in a defensive battle. Check back all season long for free MLB picks and MLB predictions at Sports Chat Place.

The Braves collected nine hits in the Saturday game, and spread the effort out over the entire lineup. Dansby Swanson was the only starter without a hit, and Travis d’Arnaud was the only player with two hits. Starting pitcher Ian Anderson went 7.0 innings with one hit, no earned runs, three walks and nine strikeouts.

Over on the Nationals’ side, starting pitcher Patrick Corbin’s great outing was wasted in the loss Saturday. Corbin went 7.0 innings with nine hits, two earned runs and eight strikeouts. Asdrubal Cabrera was tops for the hitters with his 2-for-4 effort in that one.

Pick: Sticking with the Nationals here. Wright’s two-seamer looked pretty good in his last start versus the Marlins on Tuesday, but the slider still wasn’t there. He probably won’t be in the game too long, as Wright has gone five innings in just two of his nine career starts. With Scherzer coming off a nice performance against the Rays on Monday (seven scoreless innings), I like Washington to be in a good spot for a win in this game.