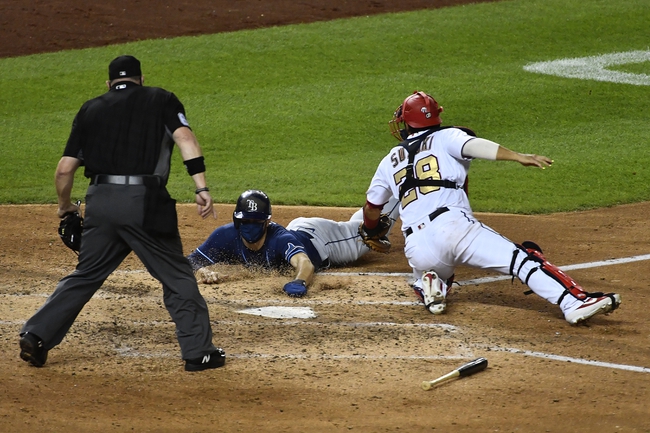 TV: SUN, MAS2 Stream the MLB Game of the Day all season on ESPN+. Sign up now!

The Washington Nationals and the Tampa Bay Rays meet Tuesday in MLB action from Tropicana Field.

This will be the first installment of a quick two-game set between these teams this week. The Nationals are coming out of a series versus the Braves over the weekend. Washington won only one of those games, an 8-7 victory on Friday. As for the Rays, they played the Red Sox in their last series. Tampa Bay split that set at two games apiece. Check back all season long for free MLB picks and MLB predictions at Sports Chat Place.

Over on the Rays’ side, they’ve found some solid offense this season in a few places. Brandon Lowe leads the team on 12 homers with 30 RBI, 30 runs and a .258 batting average. Willy Adames is hitting .282 this year with 40 hits, 24 runs and 15 RBI. As for Yoshitomo Tsutsugo, he’s notched seven homers with 21 RBI but is hitting just .198 on the year.

Pick: Going Rays here. Granted, Sanchez did okay versus the Rays in his last start, posting three runs on four hits in five innings during a win. That said, Curtiss has done a solid job in 2020 and should be good for a couple of opener innings here. Beyond that, there’s not much to worry about when it comes to the Tampa Bay pitching staff; three or four runs here should do it for the Rays.