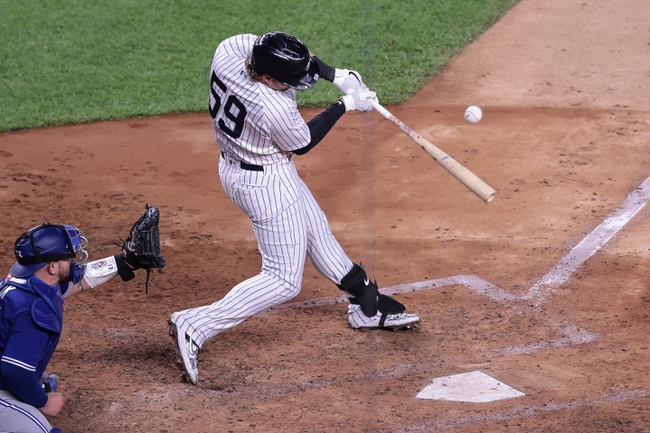 TV: YES, SNET Stream the MLB Game of the Day all season on ESPN+. Sign up now!

The Toronto Blue Jays and the New York Yankees meet in an AL East division matchup in MLB action from Yankee Stadium on Wednesday.

The Toronto Blue Jays will try to rebound from a 20-6 beatdown loss at the hands of the Bronx Bombers on Tuesday. Lourdes Gurriel Jr. had two RBIs with a home run in going 3 for 4 at the dish while Vladimir Guerrero Jr. had a solo home run and a double in going 3 for 5 at the plate. Bo Bichette had a double and an RBI in going 2 for 5 at the plate while Joe Panik and Derek Fisher each had an RBI to finish off the scoring for Toronto in the loss with Panik adding a double. Austin Kirk and J.D. Davis each had a base hit to cap off Toronto’s offense as a team in defeat. Taijuan Walker took the loss after allowing just one unearned run on six hits while striking out a pair over 1.2 innings of work to fall to 3-3 on the year. Tanner Roark will start here and is 2-1 with a 5.60 ERA and 31 strikeouts this season. In his career, Roark is 1-1 with a 3.86 ERA and 15 strikeouts against the Yankees.

The New York Yankees will try to carry over some offense from Tuesday’s blowout win. DJ LeMahieu and Luke Voit each had five RBIs with LeMahieu going 4 for 6 at the dish while Voit went 3 for 5. Gary Sanchez added four RBIs and Tyler Wade and Clint Frazier each had two RBIs while Brett Gardner and Aaron Hicks each had an RBI to finish off the scoring for New York in the win. Gio Urshela went 3 for 4 at the dish as well in the winning effort to finish off the New York offense. Deivi Garcia got the win to improve his record to 2-1 after allowing three runs on six hits while striking out six over seven innings of work. Gerrit Cole will start here and is 5-3 with a 3.20 ERA and 79 strikeouts this season. In his career, Cole is 1-0 with a 4.91 ERA and 16 strikeouts against Toronto.

I’m tempted by Toronto and plus money, especially with so much time before the game starts. However, Tanner Roark has not been good lately and it’s shown in his results on the board when all is said and done. On the other hand, Gerrit Cole goes for the Yankees and I’m just not solid on the current Gerrit Cole. Sure he threw a strong start last time out, but Cole also had a rough stretch over the last couple of weeks. I’ll side with the over here as I can see this game hitting double digits as well.