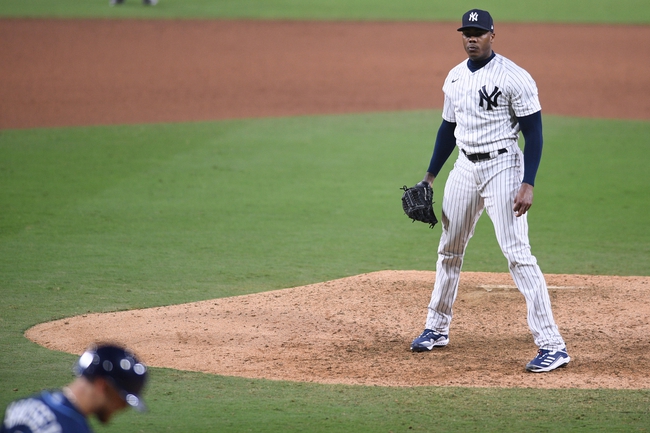 The Tampa Bay Rays will advance to their first ALCS since 2008 with a victory here. The Tampa Bay Rays offense just couldn’t get going in their game four loss, and they managed just one run on three hits while striking out 11 times. The Rays have lost four of their last six games when scoring three or less runs. Randy Arozarena leads the Rays with 12 hits and four RBI while Joey Wendle and Kevin Kiermaier have combined for 11 hits and four RBI. Tyler Glasnow gets the ball, and he was 5-1 with a 4.08 ERA and 91 strikeouts this season. Glasnow is 2-2 with a 6.00 ERA and 26 strikeouts in his postseason career.

The New York Yankees will make the ALCS for the third time in the last four years with a victory here. The New York Yankees played their most complete game of the series, as the pitching mowed down the Rays lineup and the offense came away with timely hits to open things up. The Yankees have scored no less than four runs in all six playoff games and they’ve won 14 of their last 17 games overall when scoring at least four runs. DJ LeMahieu leads the Yankees with nine hits and four RBI while Gleyber Torres and Giancarlo Stanton have combined for 17 hits and 18 RBI. Gerrit Cole gets the ball, and he was 7-3 with a 2.84 ERA and 94 strikeouts this season. Cole is 8-4 with a 2.75 ERA and 99 strikeouts in his postseason career.

Tyler Glasnow has been more than hittable this season and that hasn't changed in the postseason this year, as he's given up six runs and nine hits in 11 innings, and the Yankees just saw him. I don't trust Glasnow with what we've seen, and I certainly don't trust him on short rest. Gerrit Cole has allowed five runs and 12 hits in 13 innings this postseason, and he's proven time and time again that he's the guy you want on the mound in the playoffs. There's probably not another pitcher in baseball you want on the hill in a must win playoff game. This is why Cole was brought to New York and given such a massive paycheck. I'm not stepping in front of Cole on this stage.

Give me the Yankees.