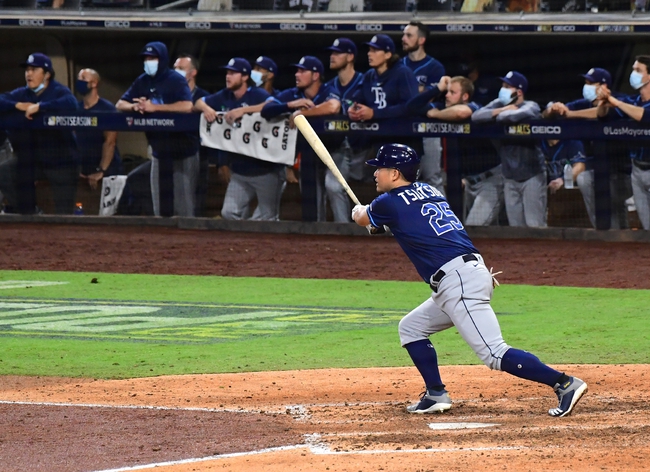 The Tampa Bay Rays and the Houston Astros meet in game five of their best-of-seven ALCS series in MLB action from Petco Park on Thursday.

The Tampa Bay Rays will try to rebound and close out the series after dropping game four on Wednesday by a final count of 4-3. Randy Arozarena had a two run home run while Willy Adames added an RBI and a double to round out Tampa Bay’s scoring as a team in the losing effort. Austin Meadows went 2 for 4 while Manuel Margot, Ji-Man Choi and Yoshi Tsutsugo each had a base hit to cap off Tampa Bay’s offense in the loss. Tyler Glasnow took the loss after allowing all four runs on eight hits with five strikeouts over six innings of work. John Curtiss is expected to start here for Tampa Bay and was 3-0 with a 1.80 ERA and 25 strikeouts in the regular season.

The Houston Astros will look to build on their game four win and force a game six after getting on the board with Wednesday’s win. George Springer and Jose Altuve each had two RBIs with Springer going 3 for 4 with a two-run home run while Altuve had a solo home run and a double. Michael Brantley, Alex Bregman, Kyle Tucker and Martin Maldonado each had a base hit as well to cap off the Astros’ offense in the victory. Zack Greinke got the win after allowing two runs on five hits while striking out seven over six innings of work. Ryan Pressly got the save by closing out the 9th inning for Houston. Luis Garcia is expected to start here and was 0-1 with a 2.92 ERA and 9 strikeouts this season.

I get why Tampa Bay is favored as Curtiss was a solid arm for the Rays this year and did a good job picking up some decisions and Garcia hasn't had a ton of success to speak of in a small sample size, so a postseason start, even one inning, could be a lot to take it. However the Astros got some momentum after getting on the board in game one and that momentum could definitely provide a spark for the Astros to get back into this series. I see the pitching matchup as more of a coin flip, so I'll take my shot with the value and the Houston Astros in this one.