The Milwaukee Brewers and the St. Louis Cardinals meet in an NL Central division matchup in MLB action from Busch Stadium on Sunday afternoon.

The Milwaukee Brewers will be looking to add to their 9-5 win over the Cardinals last time out. Avisail Garcia led the way, going 2 for 4 with a home run, a double and five RBIs while Keston Hiura had a three-run home run. Travis Shaw added an RBI as well to round out the scoring for Milwaukee in the victory. Billy McKinney had a triple and Daniel Robertson had a double while Omar Narvaez and Christian Yelich each had two hits as well. Jackie Bradley Jr. and Adrian Houser each had a base hit as well to finish off Milwaukee’s offense as a team in the win. Houser got the win on the mound as well, tossing five innings, giving up six hits while striking out three on the way to the win. Brett Anderson will start here and is 0-1 with a 7.20 ERA and 4 strikeouts this season. In his career, Anderson is 1-3 with a 3.32 ERA and 14 strikeouts against the Cardinals.

The St. Louis Cardinals will try to bounce back from their loss last time out to the Brew Crew. Austin Dean went 2 for 3 with a three-run home run while Nolan Arenado had three hits and Tommy Edman went 2 for 5 at the dish. Nolan Arenado added a double while Paul Goldschmidt, Andrew Knizner and Dylan Carlson all added base hits as well in the win for the Cards in the losing effort. Carlos Martinez took the loss, falling to 0-2 after allowing three earned runs on eight hits over five innings of work. Daniel Ponce de Leon will start here and is 1-0 with a 1.80 ERA and 3 strikeouts this season. In his career, Ponce de Leon is 1-0 with a 2.00 ERA and 23 strikeouts against Milwaukee.

I’ve gone back and forth on this game, as we’ve seen that both teams can pile the runs on when called upon. However, I trust Ponce de Leon a bit more than I do Anderson, and I just think that it’s a case of the Cardinals having more success against Anderson than Milwaukee will against PDL. Give me the Cardinals and the cheap price at home in this one. 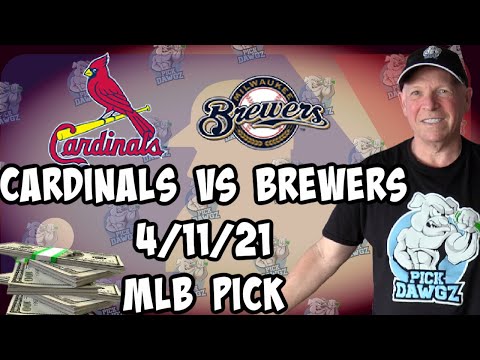