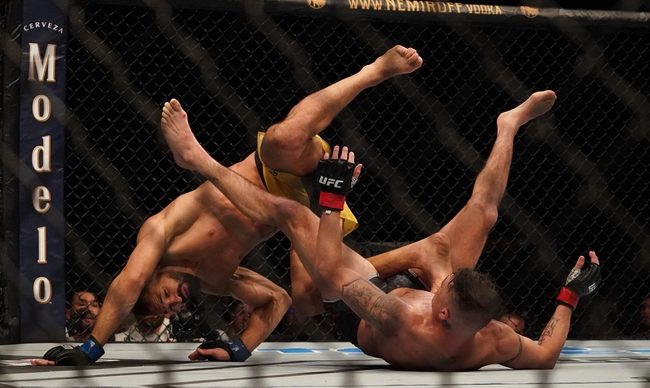 Michel Pereira enters this fight with a 23-11 record and has won 43 percent of his fights by knockout. Pereira has split his last six fights and is coming off a February loss to Diego Sanchez. Pereira is averaging 3.04 significant strikes per minute with an accuracy percentage of 51 percent. Pereira is averaging two takedowns with an accuracy percentage of 57 percent. Pereira is coming off a loss at UFC Fight Night 167 where he was disqualified due to an illegal knee. It’s an unfortunate result for Pereira considering he was likely winning on the scorecards after landing 56 total strikes and producing two takedowns. Either way, Pereira has now lost back-to-back fights and hopes to avoid three straight losses for the first time in seven years. Pereira is a fun to watch fighter who has great athleticism, is unpredictable on the feet, will throw anything at any moment and has some of the most impressive knockouts you’ll ever see. Pereira is hard to read and it makes him quite dangerous. Pereira is also a tough fighter with solid defense and eight of his 11 career losses have been decisions.

Zelim Imadaev enters this fight with a 8-2 record and has won 100 percent of his fights by knockout. Imadaev has won six of his last eight fights and is coming off a November loss to Danny Roberts. Imadaev is averaging 3.69 significant strikes per minute with an accuracy percentage of 41 percent. Imadaev is averaging 0.60 takedowns with an accuracy percentage of 50 percent. Imadaev is coming off a second round knockout loss at UFC Fight Night 163 that drops him to 0-2 under the UFC banner. Imadaev entered the UFC with a lot of hype and an 8-0 record, so it’s key he puts together an honest effort in this bout. Imadaev has obvious knockout power with all eight of his victories coming by the stoppage, and his kickboxing background helps as well. Five of Imadaev’s eight victories have come in the first round. Imadaev is a positional grappler who does a great job of controlling top position, and he has a chance to become another Russian who just wears on his opponent once on the ground. This will be Imadaev’s second career fight in the United States.

This has the ability to be a fun fight between two guys who have the ability to end things with one shot. In terms of who wins, I have to give the edge to Pereira, who is more balanced with his attack and far less predictable, which could be an issue in this smaller cage. Imadaev is coming off a rough knockout loss and hasn’t lived up to the hype just yet. It takes some proving and believing in this sport to be worthy of serious betting action.

Pereira is the more polished and trustworthy fighter up to this point.