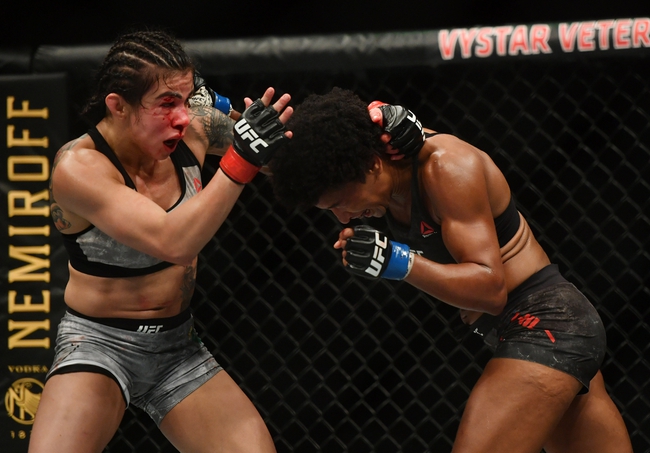 Michelle Waterson enters this fight with a 17-8 record and has won 53 percent of her fights by submission. Waterson has split her last 10 fights and is coming off a May loss to Carla Esparza. Waterson is averaging 3.31 significant strikes per minute with an accuracy percentage of 52 percent. Waterson is averaging 1.68 takedowns with an accuracy percentage of 50 percent. Waterson is coming off a split decision loss at UFC 249 where she landed 44 total strikes and defended nine of 10 takedowns. Waterson has now lost back-to-back fights and has had any momentum of a possible title shot wiped away rather quickly. Waterson is a super athletic fighter with a black belt in karate and a background in kickboxing, so leg kicks are a huge part of her game and she’s extremely quick and accurate. Waterson doesn’t have a lot of power in her hands, but she’s very flexible and can land a knockout with her legs if her opponent gets caught slipping. Waterson is also highly successful with her takedown attempts and has nine career submission victories, and he has solid takedown defense. As she approaches 35 years old, it’s key Waterson gets back on track and ends this drought she’s currently in. This will be Waterson’s third career fight in Las Vegas.

Angela Hill enters this fight with a 12-8 record and has won 58 percent of her fights by decision. Hill has split her last 12 fights and is coming off a May loss to Cláudia Gadelha. Hill is averaging 5.76 significant strikes per minute with an accuracy percentage of 49 percent. Hill is averaging 0.47 takedowns with an accuracy percentage of 37 percent. Hill is coming off a split decision loss at UFC on ESPN 8 where she was taken down once, but she was 11 percent more accurate than her opponent with her significant strikes. Many would make a case that Hill was robbed, but she now hopes to avoid back-to-back losses for the third time in her career. Hill is a polished striker with a background in Muay Thai and kickboxing, and she has one-punch knockout potential with five career knockout victories. Hill wants a fight standing up where she can use her athleticism and accuracy to her advantage, and she’s shown very little on the ground at the UFC level. Eleven of Hill’s last 14 fights have ended in decisions. This will be Hill’s fourth career fight in Las Vegas.

I’m a fan of Waterson and we’ve cashed with her in the underdog role in the past. I strongly considered taking Waterson and the slight plus money here as well. With that said, Hill is the more powerful, aggressive fighter of the two, and she’s going to enter the fight with a chip on her shoulder after her last bout. Hill shouldn’t have been given a loss in her fight against Gadelha. Waterson also has a habit of struggling against pressure fighters, and Hill is usually the aggressor with a come forward style.

Hill should win this fight and I wouldn’t be surprised if it’s a finish.