UFC on ESPN 16: Cameron Else vs. Kyler Phillips - MMA Picks, Odds, and Predictions 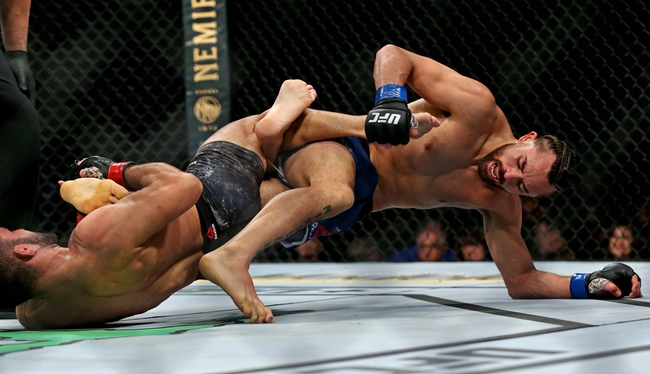 Kyler Phillips vs. Cameron Else

Kyler Phillips and Cameron Else fight Saturday night during UFC on ESPN 16 at the Flash Forum.

Kyler Phillips enters this fight with a 7-1 record and has won 57 percent of his fights by knockout. Phillips has won five of his last six fights and is coming off a February win over Gabriel Silva. Phillips is averaging 6.53 significant strikes per minute with an accuracy percentage of 53 percent. Phillips is averaging 1.90 takedowns with an accuracy percentage of 50 percent. Phillips won his UFC debut in a dominating decision at UFC Fight Night 169 where he landed 112 total strikes, 52 percent of his significant strikes and produced a pair of takedowns. The victory was Phillips’ third career decision and just the third time a fight made it out of the first round. Phillips comes from a wrestling background and has experience in BJJ and Judo, and he’s very light on his feet and usually dictates the pace of a fight. Phillips moves a ton in the octagon, mixes in his kicks well while he doesn’t have a ton of power, he is a volume striker and usually overwhelms his opponent. Phillips is a fast starter who has produced five career finishes, all coming in the first round.

Cameron Else enters this fight with a 10-4 record and has won 60 percent of his fights by knockout. Else has won each of his last six fights and is coming off a February win over Brad Evans. Else will make his UFC debut in this fight, as we last saw him in the Final Fight Championship and getting a submission win in the first round via the guillotine choke. Else is a 29-year-old from England and all 10 of his victories have come by finish with six of them coming by knockout. What’s even more impressive is that all 10 of Else’s victories have taken place in the first round and only two of his 14 fights overall have made it out of the first round. Else is an athletic striker who throws everything in his toolbox, as he mixes in knees, head kicks and elbows to get the job done. Else is also a bit slippery in the clinch and can reverse position quickly once on the ground. Two of Else’s four submission victories have come by the rear-naked choke.

Else is an interesting fighter who could surprise some folks here, but he’s also a bit inexperienced in terms of fighting quality names, and I question his ground game against an above-average wrestler. Phillips has the standup to trade with Else, but he also has the wrestling and judo background to make him uncomfortable. After what we saw from Phillips in his UFC debut, we should like his chances in this fight.

Give me Phillips, and I’ll take him in distance to trim down the ML price.