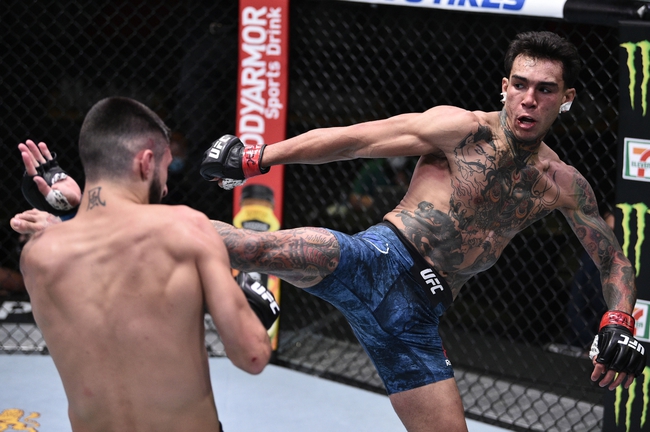 Charles Jourdain and Josh Culibao fight Saturday night during UFC on ESPN 16 at the Flash Forum.

Charles Jourdain enters this fight with a 10-3 record and has won 70 percent of his fights by knockout. Jourdain has won five of his last seven fights and is coming off a June loss against Andre Fili. Jourdain is averaging 4.58 significant strikes per minute with an accuracy percentage of 43 percent. Jourdain is averaging zero takedowns with an accuracy percentage of zero percent. Jourdain is coming off a split decision loss at UFC on ESPN 10 where he landed 65 total strikes, 44 percent of his significant strikes and was taken down five times. Jourdain is now 1-2 under the UFC banner and hopes to avoid back-to-back losses for the first time in his career. Jourdain is an exciting, athletic fighter who has a reckless mentality standing up and will throw just about anything at any moment. Jourdain likes to throw combinations and while he’s a very unpredictable, he has impressive cardio and can keep up a big work rate for three rounds. Jourdain hasn’t shown much on the ground through three UFC fights and was just taken down at will in his last bout. A brown belt in BJJ, Jourdain has finished all 10 of his victories, and he’s lost all three of his career decisions. This will be Jourdain’s first career fight in Abu Dhabi.

Josh Culibao enters this fight with a 8-1 record and has won 63 percent of his fights by knockout. Culibao has won five of his last six fights and is coming off a February loss to Jalin Turner. Culibao is averaging 1.50 significant strikes per minute with an accuracy percentage of 42 percent. Culibao is averaging zero takedowns with an accuracy percentage of zero percent. Culibao lost his UFC debut at UFC Fight Night 168, a fight where he landed just 12 total strikes and failed on all three of his takedown attempts. Culibao was knocked out in the second round, and it’s always interesting to see how fighters respond from their first career loss, especially when they’ve been knocked out. Culibao is a bouncy fighter with good footwork and always moving around in the octagon while looking to counter strike his opponent. Culibao is a volume striker who works the body well and will mix in a kick here and there. Culibao hasn’t shown a ton of wrestling in his career, but he does control position well and his cardio has allowed him to win all three career decisions. Culibao has five knockout wins on his resume.

It’s tough to get behind Culibao with any confidence after watching him get absolutely destroyed in his UFC debut. While the potential is there, it’s clear Culibao is still a bit raw for for the big stage against better competition. Jourdain is the much more proven fighter with a good variety of strikes in his game and has the power to end things if given the opening. Jourdain has also proven himself at the UFC level and had his moments in his last bout despite the loss. Jourdain should have his way in this fight and I’d expect a finish.

So, instead of laying a crazy price with Jourdain, give me the under 2.5 rounds.