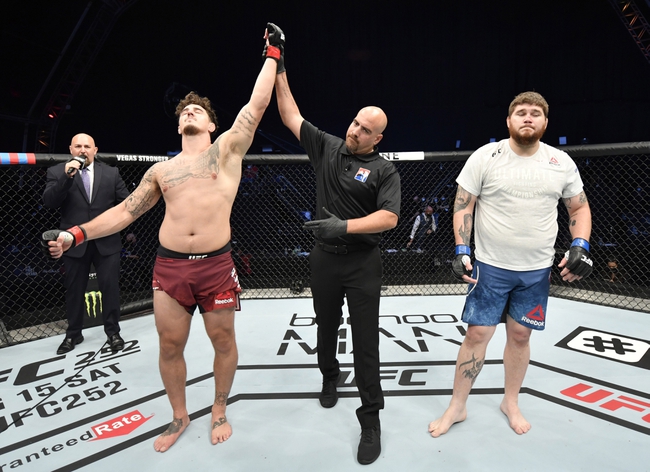 Tom Aspinall enters this fight with a 8-2 record and has won 88 percent of his fights by knockout. Aspinall has won five of his last six fights and is coming off a July win over Jake Collier. Aspinall is averaging 13.33 significant strikes per minute with an accuracy percentage of 100 percent. Aspinall is averaging zero takedowns with an accuracy percentage of zero percent. Aspinall won his UFC debut at UFC on ESPN 14 with a first round knockout, a fight that included just 13 total strikes. Aspinall has now produced knockouts in each of his last four fights and all of them were decided in the first round. Aspinall comes over from a boxing background and obviously has great knockout power in either hand, and he doesn’t like to waste much time going to work. All eight of Aspinall’s victories have been decided in the first round. Aspinall does a good job of keeping his hands up in his stance, and he usually is the one walking down his opponent. Aspinall hasn’t shown a lot of ground work up to this point, but he does have a good ground and pound and will throw in a few leg kicks as well. Aspinall produced submission victories in his first two pro fights and one of those was a heel hook over five years ago.

Alan Baudot enters this fight with a 8-1 record and has won 88 percent of his fights by knockout. Baudot has won five of his last six fights and is coming off an April (2019) win over Todd Stoute. Baudot will make his UFC debut in this fight, and we last saw him at TKO 47 where he won by DQ, but he hasn’t been inside the octagon in well over a year. There’s limited film available on Baudot, but it’s quite clear that he’s a stand up striker with legit knockout power and isn’t afraid to stand in the pocket and let his hands go. In fact, all but one of Baudot’s fights didn’t end in knockout and six of his fights ended in the first round. Baudot will throw in the occasional leg kick, but for the most part he wants to close the distance and throw powerful shots. However, Baudot has shown to drop his hands and is a bit reckless at times, and that leads to some nasty counters. We saw Baudot get knocked out cold three years ago by Dalcha Lungiambula and those things will happen more as the competition improves if he doesn’t have a bit of a smarter approach.

This should be a fun fight between two polished strikers, but Aspinall has the clear edge due to his boxing being far more polished and he’s a lot less sloppy with the exchanges. Baudot is a bit too wild and sloppy defensively, and he’s already paid for it once. Still, there’s no money to be made with Aspinall in this bout due to an insane ML price. With two knockout artists and both liking to finish fights early, I’ll take a stab at the under 1.5 rounds. We’re playing the trends here and getting a much more favorable price.