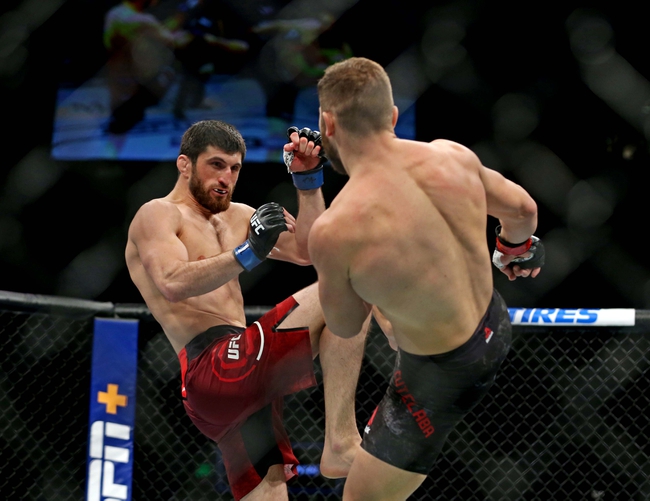 Magomed Ankalaev and Ion Cutelaba fight Saturday in UFC 254 at the Flash Forum.

Magomed Ankalaev enters this fight with a 13-1 record and has won 62 percent of his fights by knockout. Ankalaev has won his last four fights and is coming off a February win over Ion Cutelaba. Ankalaev is averaging 3.46 significant strikes per minute with an accuracy percentage of 56 percent. Ankalaev is averaging 0.68 takedowns with an accuracy percentage of 33 percent. Ankalaev is coming off a first round knockout at UFC Fight Night 169, as he landed several head kicks and a couple of punches, and the ref stopped the fight. While the result was extremely controversial, the victory does move Ankalaev to 4-1 under the UFC banner and has his name rising in the light heavyweight division. Ankalaev is a tough Russian striker who can take a shot, has power in his hands that’s helped produced eight knockouts and he comes from a wrestling background. Ankalaev is quite an athlete who will mix in a bunch of kicks and isn’t afraid to push the pace on the feet. Ankalaev has also proven to have above-average takedown defense through five UFC fights. Ankalaev has very good cardio for a man his size and it’s helped him win all six of his career decisions. This will be Ankalaev’s first career fight in Abu Dhabi.

Ion Cutelaba enters this fight with a 15-5 record and has won 80 percent of his fights by knockout. Cutelaba has split his last eight fights and is coming off a February loss to Magomed Ankalaev. Cutelaba is averaging 5.29 significant strikes per minute with an accuracy percentage of 39 percent. Cutelaba is averaging 2.59 takedowns with an accuracy percentage of 71 percent. Cutelaba is coming off a controversial loss where it looked like he was wobbled a bit, but many believe he was giving his opponent the classic rope-a-dope and hoping to setup a haymaker. Regardless, Cutelaba is now 4-4 under the UFC banner and hopes to avoid back-to-back losses for the first time in his career. Cutelaba comes from a wrestling background while also having experience in Sambo and Judo, but he’s most known for his standup striking. Cutelaba is impressive power and one punch knockout potential, and 12 of his 15 career victories have come by knockout. Cutelaba throws nothing but heavy strikes and it’s what he was attempting to land in the first fight before it was rewarded with an early stoppage. The issue with Cutelaba is that his conditioning fades rather quickly, and he’s lost three of his last four fights that have made it out of the first round. This will be Cutelaba’s first career fight in Abu Dhabi.

Cutelaba has the power advantage in this fight, but that’s about the only edge he has heading into a rematch. Ankalaev is the more versatile striker, has better head movement, lands his shots at a much higher percentage and has the edge on the ground with his wrestling if it gets to that point. Ankalaev also has a clear conditioning edge and can cruise to victory if he makes it out of the first round. And while you can say Cutelaba was playing hurt in the first fight, he did eat some shots and had to have felt something to even consider taking that approach. Cutelaba deserves a rematch to remove all doubt, but I’m not sure this fight ends up any different.

Ankalaev wins, and I’ll take him to win inside distance to provide a better price.