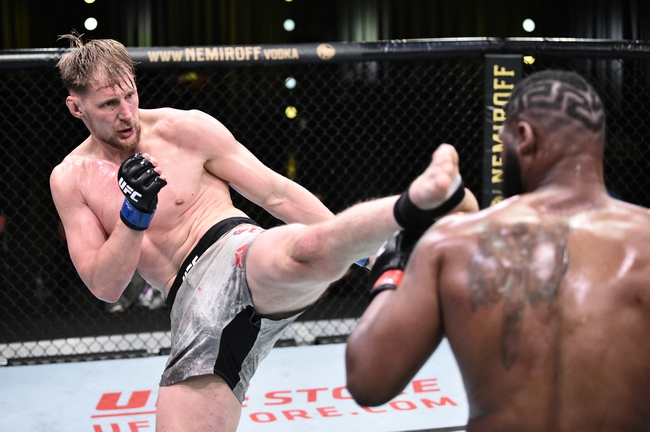 Alexander Volkov and Walt Harris fight Saturday in UFC 254 at the Flash Forum.

Alexander Volkov enters this fight with a 31-8 record and has won 65 percent of his fights by knockout. Volkov has won seven of his last nine fights and is coming off a June loss to Curtis Blaydes. Volkov is averaging 5.36 significant strikes per minute with an accuracy percentage of 60 percent. Volkov is averaging 0.75 takedowns with an accuracy percentage of 75 percent. Volkov is coming off a decision loss at UFC on ESPN 11 where he landed 127 total strikes, but he was far less accurate with his significant shots and was taken down 14 times. Volkov is now 5-2 under the uFC banner and hopes to avoid back-to-back losses for the second time in his career. Volkov is a striker at heart who is most comfortable standing up and has 20 victories by knockout. Volkov has a reach of 81 inches, very heavy hands and has been deadly accurate while throwing with a purpose. Volkov is always looking to stay busy in the octagon and has a very successful ground and pound if things are ever taken to the canvas. With a brown belt in Kyokushin, Volkov is one of the cleaner strikers in this division. This will be Volkov’s first career fight in Abu Dhabi.

Walt Harris enters this fight with a 13-8 record and has won 100 percent of his fights by knockout. Harris has split his last six fights and is coming off a May loss to Alistair Overeem. Harris is averaging 2.96 significant strikes per minute with an accuracy percentage of 38 percent. Harris is averaging 0.35 takedowns with an accuracy percentage of 33 percent. Harris is coming off a second round knockout loss at UFC on ESPN 8 where he ate 97 total strikes and was taken down once. Harris now hopes to avoid back-to-back losses for the third time in his career. There’s no secrets when it comes to Harris, as he’s an athletic, explosive fighter who relies on his striking ability and has won all 13 of his fights by knockout. Harris is a nightmare standing up and he does a lot of his work in the early rounds. However, if an opponent can survive the early onslaught from Harris, they have a really good chance of wearing him down and stealing the fight. Five of Harris’ eight career losses have made it out of the first round. This will be Harris’ first career fight in Abu Dhabi.

Getting a power striker like Harris at big plus money is always worth a look, as you just need them to land something clean to cash a ticket. However, Harris does have conditioning issues and we just saw him get badly outworked by a crafty veteran. Volkov has seen pretty much everything with 39 bouts under his belt, and he just went five rounds with an explosive, balanced fighter in Blaydes. Volkov has the reach advantage here and the amount of different looks he can throw in this fight gives him a serious edge.

I like Volkov being the fighter that bounces back from a loss.