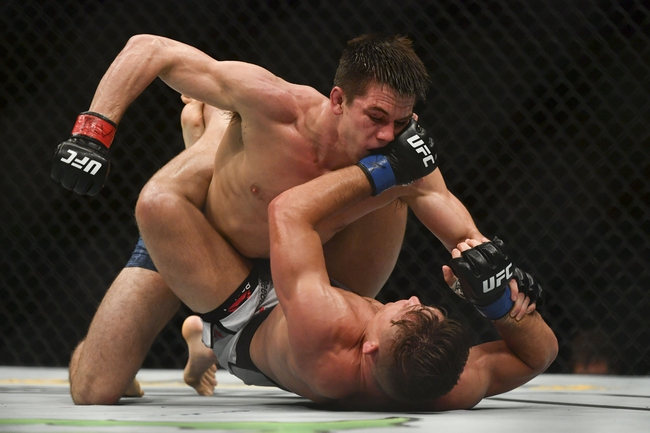 Alexander Hernandez enters this fight with a 11-3 record and has won 45 percent of his fights by decision. Hernandez has won six of his last eight fights and is coming off a May loss to Drew Dober. Hernandez is averaging 3.17 significant strikes per minute with an accuracy percentage of 38 percent. Hernandez is averaging 2.15 takedowns with an accuracy percentage of 38 percent. Hernandez is coming off a second round knockout loss at UFC Fight Night 171 where he ate 65 total strikes. Hernandez has now been knocked out in two of his last three fights and hopes to avoid back-to-back losses for the first time in his career. Hernandez comes from a wrestling background and has seen eight of his 14 fights end in submissions or decisions. Hernandez has an impressive gas tank and appears to be more comfortable in the clinch or on the canvas. A brown belt in BJJ, Hernandez also has one-punch knockout potential and does a good job of closing the distance when on his feet. However, recent results are starting to raise an eyebrow about Hernandez’s chin and he has some doubters to silence in this fight. This will be Hernandez’s second career fight in Las Vegas.

There’s a lot of reasons to be down on Gruetzemacher, as he’s been out of the octagon for two and a half years and has battled several injuries. You have no idea what to expect from Gruetzemacher and I’m sure that plays into this line. Hernandez is the young, flashy fighter who is considered somebody who can climb up the division and make some noise. However, Gruetzemacher is a talented fighter who does serious damage on the feet and if he’s anything close to what he was before he got injured, he’s more than a live dog in this fight. We’ve seen Hernandez gets stopped twice in his last three bouts and Gruetzemacher is a brawler who should not be taken lightly.

If you’re looking for a big underdog on this fight card, Gruetzemacher is probably worth a shot.