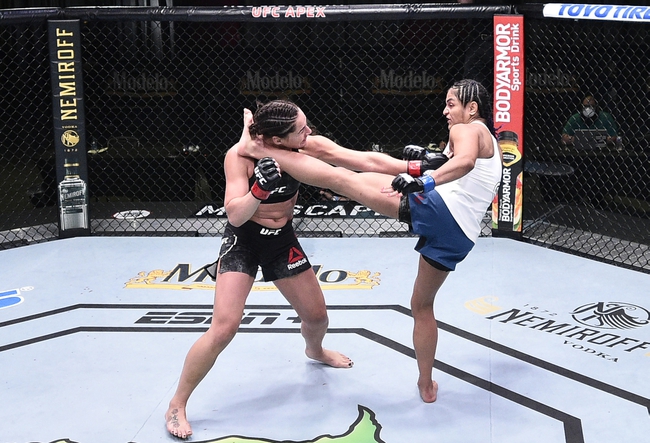 Katlyn Chookagian and Cynthia Calvillo fight Saturday in UFC 255 at the UFC APEX.

Katlyn Chookagian enters this fight with a 14-4 record and has won 79 percent of her fights by decision. Chookagian has split her last six fights and is coming off an October loss to Jessica Andrade. Chookagian is averaging 4.18 significant strikes per minute with an accuracy percentage of 35 percent. Chookagian is averaging 0.30 takedowns with an accuracy percentage of 15 percent. Chookagian is coming off a first round knockout loss at UFC Fight Night 180 where she ate 62 total strikes and was taken down twice. Chookagian has now been knocked out in two of her last three fights and hopes to avoid back-to-back losses for the first time in her career. Chookagian is most comfortable standing up, as she has some decent striking skills and a background in karate, and she does have two knockouts with her knees. However, Chookagian is more of a points fighter who doesn’t take much risk, doesn’t put much power behind her shots and is looking to do just enough to get a victory with the judges. Chookagian’s fights can be very tough to judge due to the lack of action a lot of the time, and 13 of her 18 career fights have ended in decision. A brown belt in BJJ, Chookagian has never been finished by submission. This will be Chookagian’s second career fight in Las Vegas.

Cynthia Calvillo enters this fight with a 9-1-1 record and has won 44 percent of her fights by decision. Calvillo has won four of her last six fights and is coming off a June win over Jessica Eye. Calvillo is averaging 4.21 significant strikes per minute with an accuracy percentage of 44 percent. Calvillo is averaging 1.97 takedowns with an accuracy percentage of 46 percent. Calvillo is coming off a decision win at UFC on ESPN 10 where she landed 150 total strikes, 47 percent of her significant strikes and produced four takedowns. Calvillo hasn’t lost in three years and is now 6-2 under the UFC banner. Calvillo is a polished striker with some pop in her hands and good timing on her counters, and she has a background in BJJ, wrestling and Muay Thai. Calvillo mixes in her takedowns between strikes and has produced submissions in three of her last six wins. While Calvillo is capable of winning a stand up striking battle, she’s most effective when she taps into her ground game and gets the most out of her athleticism. Calvillo has a bit of a brawler feel to her and she’s a strong up and comer who still has time to climb up the rankings at 33 years old. This will be Calvillo’s second career fight in Las Vegas.

It’s tough for me to get behind Chookagian against above-average fighters, as she doesn’t have a ton of finish ability and spends a lot of time just staying busy to impress judges. Calvillo is the much smaller fighter in this spot, but she’s the aggressor who has more pop in her hands and would have a clear edge if this fight went to the ground. Calvillo is jut the more balanced fighter of the two who has th higher probability of finishing this fight.

Hard not to side with Calvillo here, even if the price is a bit steep.