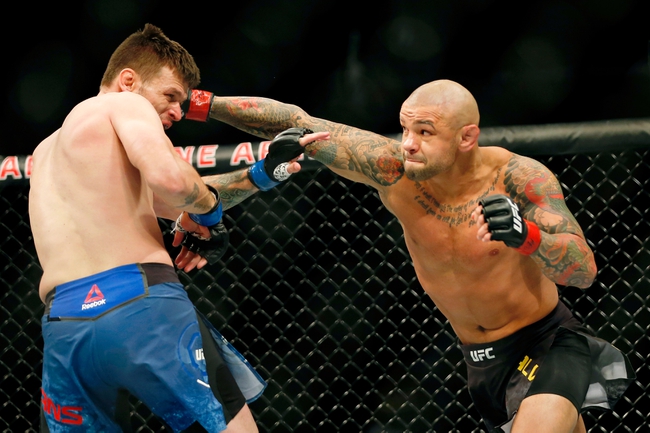 Mike Perry and Tim Means fight Saturday in UFC 255 at the UFC APEX.

Mike Perry enters this fight with a 14-6 record and has won 79 percent of his fights by knockout. Perry has split his last 12 fights and is coming off a June win over Mickey Gall. Perry is averaging 4.36 significant strikes per minute with an accuracy percentage of 48 percent. Perry is averaging 0.66 takedowns with an accuracy percentage of 46 percent. Perry is coming off a decision win at UFC on ESPN 12 where he landed 103 total strikes, 58 percent of his significant strikes and produced a takedown. Perry has seen six of his last eight fights end in decision, and he looks for back-to-back wins for the first time since 2017. Perry is a pure striker with heavy hands and a deep boxing background that’s allowed him to produce knockouts in 11 of his 14 victories, a few that have ended with just one shot. Each of  Perry’s first 11 victories came by knockout, as he throws crisp combinations, gets in and out nicely and will mix in a knee in the clinch every now and then. Perry is a purple belt in BJJ, so he has some ground game experience, but everybody knows how he butters his bread and the style of fight he wants. This will be Perry’s fifth career fight in Las Vegas.

Tim Means enters this fight with a 30-12-1 record and has won 63 percent of his fights by knockout. Means has split his last eight fights and is coming off an August win over Laureano Staropoli. Means is averaging 4.92 significant strikes per minute with an accuracy percentage of 46 percent. Means is averaging 0.98 takedowns with an accuracy percentage of 42 percent. Means is coming off a decision win at UFC Fight Night 174 where he landed 126 total strikes, 57 percent of his significant strikes and produced two takedowns. Means now looks for back-to-back wins for the first time since UFC 202. Means is an athletic fighter who comes from a boxing background and does his best work standing up where he has a high work rate and solid defensive skills. Means doesn’t take a lot of punishment on the feet and has only been knocked out twice in 12 career losses. Means has above-average takedown defense and has five career submission victories, but he’s also been submitted five times. Four of Means last six losses have been finishes. This will be Means’ seventh career fight in Las Vegas.

These are two solid stand up strikers with knockout potential, but they’ve also had issues stringing wins together, so you can make a case for either side. The difference for me is that Means looked better his last time out, and he’s the much bigger fighter here with a four-inch reach advantage. If this ends up being a stand and bang style fight, I’d give the slight edge to Means.

Give me the underdog in this bout.