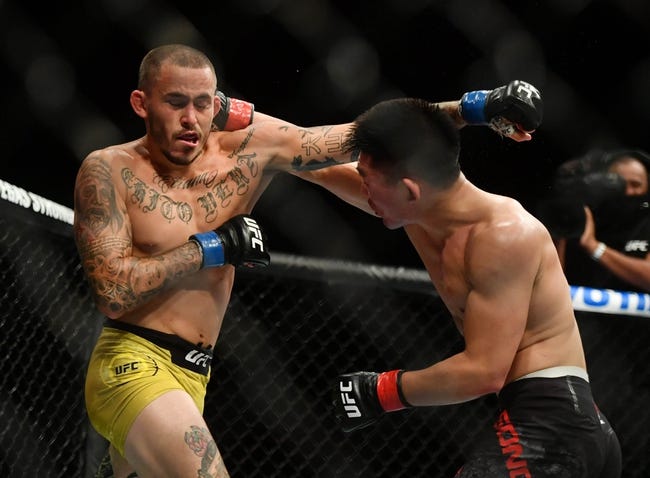 Jose Aldo enters this fight with a 28-7 record and has won 61 percent of his fights by knockout. Aldo has lost five of his last seven fights and is coming off a July loss to Petr Yan. Aldo is averaging 3.48 significant strikes per minute with an accuracy percentage of 44 percent. Aldo is averaging 0.60 takedowns with an accuracy percentage of 61 percent. Aldo is coming off a knockout loss at UFC 251 where he ate 258 total strikes and only landed 83 of his own. Aldo has now lost three straight fights and hasn’t been on the winning side since UFC Fight Night 144. Aldo is a black belt in BJJ and has a background in Muay Thai. Aldo is most known for his power striking and his leg kicks, and three of his last six victories have come by knockout. Aldo is also one of the more well conditioned fighters that’s allowed him to win 10 of his 12 career decisions, and he has a takedown defense percentage of 90 percent. Aldo may no longer be in his prime at 34 years old and with a lot of damage taken over his career, but he’s still an all-time great and that experience makes him dangerous. This will be Aldo’s sixth career fight in Las Vegas.

Marlon Vera enters this fight with a 16-6-1 record and is winning 50 percent of his fights by submission. Vera has won six of his last seven fights and is coming off an August win over Sean O'Malley. Vera is averaging 3.70 significant strikes per minute with an accuracy percentage of 48 percent. Vera is averaging 0.86 takedowns with an accuracy percentage of 42 percent. Vera is coming off a first round knockout at UFC 252 where he hurt O'Malley’s leg and finished with ground and pound. Vera has finished each of his last eight victories and three of his last four wins have come by knockout. Vera has a chance to win at least two fights for the fourth straight year. Vera is an athletic, jumpy fighter who is tough to get comfortable against on the feet and he throws compact strikes and leg kicks with some serious pop behind them. Vera is also a black belt in BJJ, so he knows his way around the canvas, and he’s never been finished in his career despite the five losses. Vera is an exciting fighter with a polished skill set and has a chance to seriously climb these rankings if he stays on this track he’s been on the last couple years. This will be Vera’s third career fight in Las Vegas.

Aldo may be on a losing streak, but he had his moments against Yan and could have won that fight if he didn’t gas in the later rounds. In a shorter fight, Aldo has to like his chances and I can see why he’s the favorite here. However, we’re getting Vera, a red hot fighter at plus money. Vera is a powerful striker who can fight out of either stance and has never been finished in his career. Vera is a crazy, tough fighter out of Ecuador and for whatever reason doesn’t get the respect he deserves.

I’m not turning down this price.