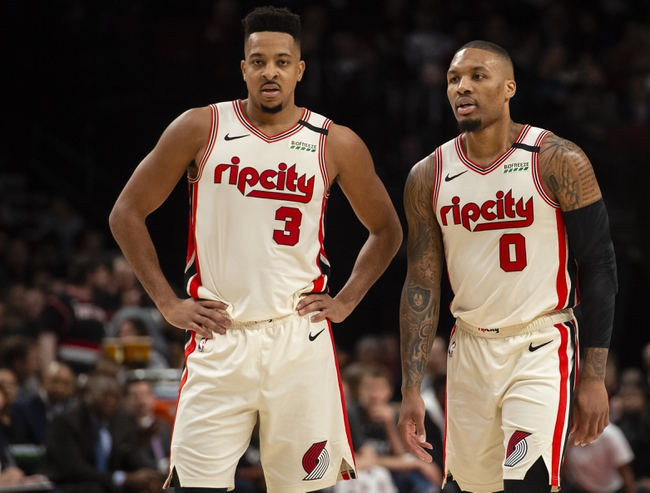 The Portland Trail Blazers look to make a run as the NBA season restarts.

The Portland Trail Blazers were one of the biggest disappointments in the NBA before the Coronavirus break, as this was a team that made the Western Conference Finals last year and is currently sitting outside of a playoff spot with a 29-37 record. The Trail Blazers have lost 10 of their last 16 games, and they were one of the worst defensive teams in the league by allowing 115.2 points per game and 37.7 percent shooting from deep. It was a frustrating watch most nights and it’s worth seeing if the Trail Blazers can make the most of a possible second chance.  Get NBA Picks and NBA Predictions for EVERY GAME at Sports Chat Place.

Let’s give a quick breakdown of the Trail Blazers remaining schedule and how the break impacts the squad moving forward as we gear up for NBA playoff basketball in Orlando.

Roster Update: The Trail Blazers are one of the teams that benefit most from the break, as center Jusuf Nurkic will be back from a leg injury and power forward Zach Collins is expected to be cleared from a shoulder injury. Nurkic has yet to play this season, but he was a key contributor for the Trail Blazers last season and provides some quality depth alongside Hassan Whiteside. Collins played in only three games before his injury, but he was averaging nine points, four rebounds and two assists on 47.4 percent shooting from the field and 42.9 percent shooting from deep. The only player the Trail Blazers will be without is Rodney Hood, as he’s sidelined with a torn achilles and will not come back under any circumstances.

Help Or Hurt: While Collins and Nurkic have played a combined 86 minutes this season and we may not see them at their full potential due to the lack of reps, just having them on the court is an improvement. The Trail Blazers were really short on depth, to the point they made moves to get Carmelo Anthony and Trevor Ariza. Damian Lillard and CJ McCollum can do a lot of heavy lifting, but they need help around them and with three contributors previously out, the Trail Blazers were sucking wind most nights. Whatever Collins and Nurkic can provide in Orlando will be an upgrade from what they were dealing with previously.

Potential Seeding: The Trail Blazers currently sit 3.5 games behind the Memphis Grizzlies for the eighth seed in the West, and they can earn a playoff spot by either winning the seed outright or winning a play-in tournament if they finish within four games. The Trail Blazers don’t have the easiest schedule in the world, but they’re going to be as close to full strength as they’ve been all year and this is pretty much the same team that won 53 games last season and made the conference finals.