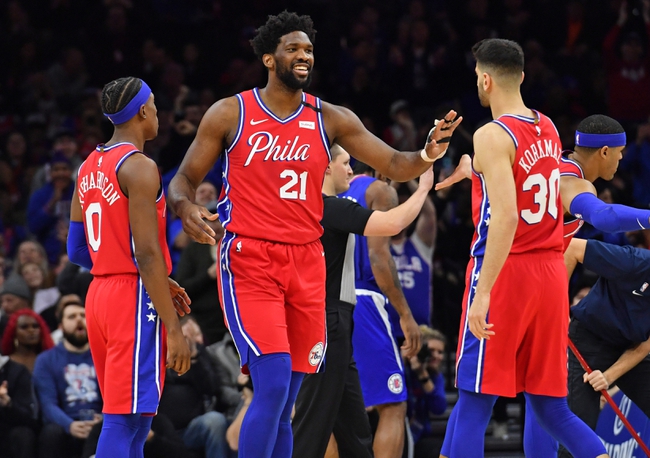 The Philadelphia 76ers have goals of making the NBA finals for the first time since 2000-01 when the season resumes in July.

The 76ers were a rather disappointing team this season that includes a 39-26 overall record and a 10-24 record on the road. Considered an NBA title contender when the season started, there’s fair reason to question the 76ers ability, heart and even coaching staff. This will be an important trip for the direction of the 76ers franchise when the season returns. Get NBA Picks and NBA Predictions for EVERY GAME at Sports Chat Place.

Let’s give a quick breakdown of the 76ers remaining schedule and how the break impacts the squad moving forward as we gear up for NBA playoff basketball in Orlando.

Roster Update: The 76ers should be 100 percent healthy when play resumes, as Ben Simmons has been making progress with his back injury and reports indicate he’s been outstanding. Joel Embiid says he’s been training six times a week and has a chip on his shoulder after a disappointing season that wasn’t up to his standards. Both Simmons and Embiid have missed time this season with various injuries.

Help Or Hurt: If there’s one team that the break has helped, it’s got to be the 76ers, as this team hasn’t lived up to expectations, the road struggles were getting louder and their top-two players couldn’t stay healthy. Now, the 76ers are as healthy as they’ve been all season and they won’t have to play another road game with every contest being on a neutral court. I’m not sure how the break helps a subpar coach in Brett Brown or if this team will ever live up to expectations, but getting Simmons and Embiid at 100 percent makes the hiatus worthwhile.

Potential Seeding: Currently locked in the sixth seed but share the same record as the Indiana Pacers, the 76ers can realistically end up anywhere between the fourth seed and sixth seed. It comes down to what matchup the 76ers will want in the first round, as they could end up playing the Boston Celtics, Miami Heat or Indiana Pacers. The good news for the 76ers is that four of their final eight games are against teams currently not in a playoff spot.

Odds: The 76ers have odds of +1000 to win the East and +2500 to win the NBA title. I’m a lot more intrigued about the title odds than I am the 76ers winning the conference due to more than double the payout. I don’t like Brett Brown as much as the next guy and I have questions about the 76ers depth and leadership. However, in terms of raw talent, the 76ers make a case for the best starting five in the league and there’s a championship somewhere when this team plays to its full potential. Will it happen? Probably not. However, I’ll include the 76ers title odds in my future portfolio based on the upside.