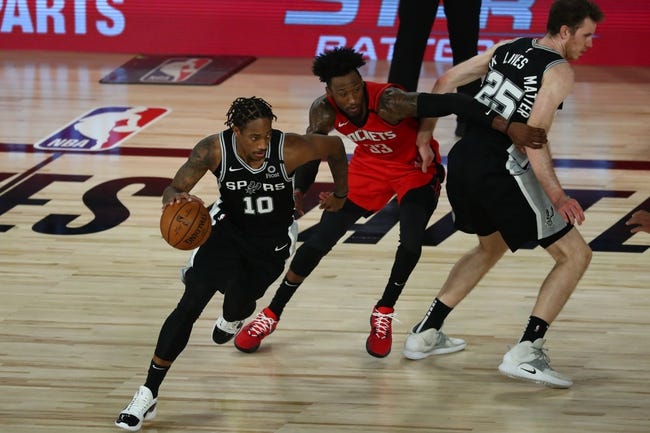 The Houston Rockets play host to the San Antonio Spurs at the Toyota Center on Saturday night.

The San Antonio Spurs have been in decent form lately as they’ve won three of their past five games and they will be looking to build some momentum after outlasting the Timberwolves in a 111-108 home win on Wednesday. DeMar DeRozan led the team with 30 points, eight rebounds and six assists, Jakob Poeltl added 19 points on nine of 10 shooting while Dejounte Murray racked up 15 points with 11 rebounds and six assists. As a team, the Spurs shot 44 percent from the field and seven of 26 from the 3-point line as they struggled to get going and trailed by as many as 16 points, before going on a 27-8 run to steal the lead and the game from the Timberwolves. Keldon Johnson scored just six points on two of nine shooting while Lonnie Walker scored just two points on one of 10 shooting.

Meanwhile, the Houston Rockets have been in great form lately as they’ve won seven of their past eight games and they will be looking to stay hot after taking down the surging Grizzlies in a 115-103 road win on Thursday. John Wall led the team with 22 points and eight assists, Eric Gordon added 20 points, Jae’Sean Tate scored 19 points on seven of nine shooting while Christian Wood chipped in with 17 points before leaving the game with an ankle injury. As a team, the Rockets shot 47 percent from the field and 19 of 45 from the 3-point line as they as they took control of the game in the second quarter where they outscored the Grizzlies by 33-20, before going on another run in the third quarter to push the lead out to 25 points.

Rudy Gay sat out on Wednesday due to left hip flexor tightness and is questionable for Saturday, while LaMarcus Aldridge has been ruled out once again. Christian Wood is out with a severe ankle sprain. The Spurs were far from convincing in their narrow win over the slumping Timberwolves in their last outing and they will be shorthanded once again, so I’m sticking with the red-hot Rockets to take advantage and get the win and cover here.