The Denver Nuggets invade the Staples Center to take on the Los Angeles Clippers on Thursday night.

The Denver Nuggets have been in red-hot form as they’ve won 12 of their past 15 games and they will be looking to build on their current three-game win streak after taking down the 76ers in a 104-95 home win on Tuesday. Jamal Murray led the team with 30 points on 12 of 24 shooting, Michael Porter Jr. added 27 points with 12 rebounds on 11 of 16 shooting, while Nikola Jokic racked up 21 points with 10 rebounds and five assists. As a team, the Nuggets shot 48 percent from the field and 12 of 31 from the 3-point line as they set the tone with 44 points in the first quarter to take the early 25-point lead, before cruising in the second half as they 76ers never really threatened.

Meanwhile, the Los Angeles Clippers have been in great form as they’ve won eight of their past 11 games, but they will be looking to bounce back here after having their six-game win streak halted by the lowly Magic in a 103-96 home loss on Tuesday. Kawhi Leonard led the team with 28 points with five assists, Luke Kennard added 17 points while Reggie Jackson chipped in with 15 points and seven assists on six of 18 shooting. As a team, the Clippers shot just 41 percent from the field and 12 of 37 from the 3-point line as they led for most of the game after holding the Magic to just 13 points in the first quarter, before losing the game in dramatic fashion as they allowed the Magic to close the game on a 17-3 run to steal the game late.

The Nuggets are coming into this one with plenty of momentum as they’ve won 12 of 15 and are coming off a nice win over the red-hot 76ers, while the Clippers were rolling through teams before falling flat on their faces against the slumping Magic on Tuesday. Paul George has been rule out with foot soreness, while Marcus Morris is listed as questionable, so I’m leaning towards the Nuggets to take advantage in this spot. 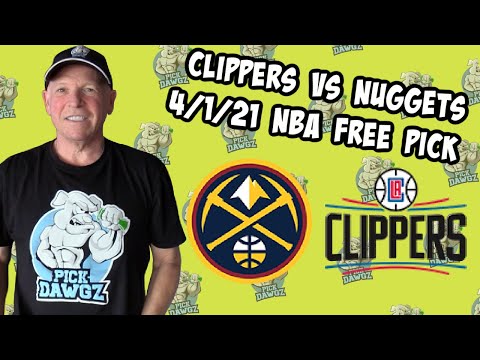