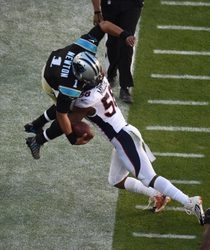 What Five Things Will Be Crucial in Tonight's NFL Kick-Off Game?

Good morning, football fans. We are officially back to football (in about T-11 hours, but who’s counting?) Today, we’re going to buzz through the top five things you should watch for in tonight’s match-up between the Denver Broncos and the Carolina Panthers.

If you’ve read anything I’ve ever written about the Broncos, you already know I have a penchant for Von Miller (and I have no doubt he’ll be ready this evening). The reigning Super Bowl MVP ought to be at his best tonight, promising Cam Newton “I was 30 seconds behind you in the draft. I’ll be two seconds behind you tonight.” Here we go.

Denver’s quarterback...situation...debacle....whatever you’re calling it in your house, has been a concern the entire offseason. After Peyton Manning hung-up his cleats for good, the club lost capable starter Brock Osweiler to the Houston Texans and cut Mark Sanchez, leaving them with former Northwestern Wildcat, Trevor Siemian, at the top of their depth chart. Siemian, possibly the league’s most unlikely starter this year (and Blaine Gabbert has a job, people), will be under center for tonight’s first snap.

CB Josh Norman became a fundamentally important part of the Carolina Panthers’ defense in 2015. The team, however, was unable to get a deal worked out with Norman during free agency and he wound-up a Washington Redskin. Tonight we’ll get a taste of Carolina’s D without one of its most talented players.

In Super Bowl 50, third downs played a crucial role in setting the tone of the game. In the Panthers’ case, 12 of their 15 third down situations were third-and-8 or longer. Those third-and-longs culminated in four sacks, two forced fumbles, and a defensive touchdown for the Broncos. If Miller and Co. can make that happen again, we could be looking at a Denver win tonight.

As in most NFL games, the team that establishes the run first is likely to have an edge. In the case of the Carolina Panthers, the QB is a big part of said running game. Since Siemian has yet to throw a pass in the pros, let alone score a rushing touchdown, it’s safe to say that Newton has the advantage on this front (unless the youngster comes out and shocks everyone with a 40-yard run). If Newton can run through Denver’s D (I’m not saying he will), Carolina just might get the W.

The pick in this article is the opinion of the writer, not a Sports Chat Place site consensus.
Previous Pick
Edmonton Eskimos vs. Calgary Stampeders CFL Pick, Odds, Prediction - 9/5/16
Next Pick
Denver Broncos vs. Carolina Panthers - 9/8/16 NFL Pick, Odds, and Prediction