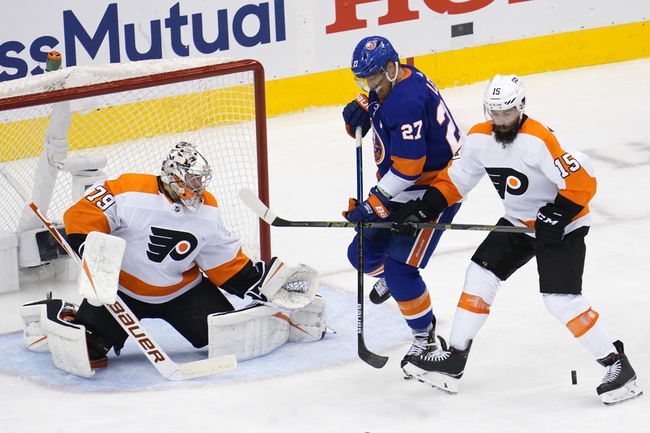 The Philadelphia Flyers and the New York Islanders meet in game four of their best-of-seven Eastern Conference semifinal series in NHL action from Scotiabank Arena on Sunday.

The Philadelphia Flyers will try to get back into the series after falling behind 2-1 with a 3-1 loss to the Islanders in game three last time out.

Tyler Pitlick opened the scoring for the Flyers with the lone goal of the opening period but Matt Martin would tie the game at one for the Islanders just after the seven minute mark of the second period. Leo Komarov would push the Islanders in front in the dying seconds of the middle period, making it 2-1 heading into the 3rd. Anders Lee would give the Isles an insurance goal at 3-1 just under four minutes into the 3rd period and despite the Flyers outshooting New York 12-4 in the 3rd period, Philly wouldn’t get any closer as New York rode the two-goal lead to the finish line, taking another series lead in the process.

Semyon Varlamov got the win in goal for the Islanders to improve to 9-2 this postseason after stopping 26 of 27 shots faced in the winning effort while Carter Hart took the loss in net for Philadelphia after giving up three goals on 29 shots faced in defeat.

Game three kind of played out true to form from a goal-scoring standpoint, as the hits were hard and goals were even harder to come by and even on a back-to-back, I’m expecting more of the same here. Neither side will want to give an inch or be the first one to blink in this game where any bounce could be the difference between a 3-1 series at the final horn or a 2-2 series making it a best-of-three the rest of the way. I’ll side with the under here as my free pick for this game, but my stronger play is on who I think wins this game and I have it available as a premium pick that you can find here.