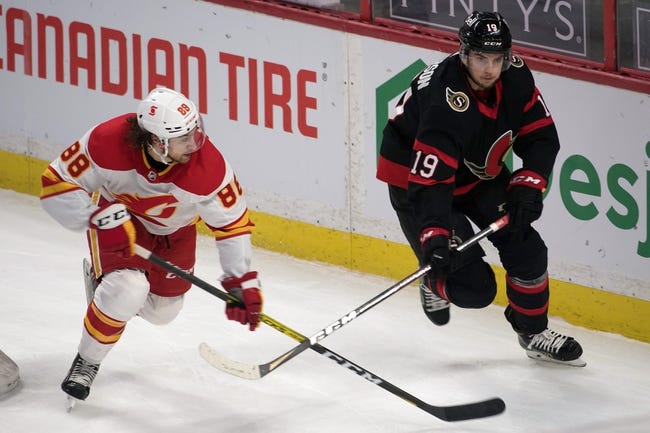 The Calgary Flames and Ottawa Senators meet Monday in NHL action at the Canadian Tire Centre.

The Calgary Flames need a win after losing six of their last nine games. The Calgary Flames are averaging 2.4 goals per game and are scoring on 21.1 percent of their power play opportunities. Johnny Gaudreau leads Calgary with nine goals, Elias Lindholm has 13 assists and Matthew Tkachuk has 77 shots on goal. Defensively, the Calgary Flames are allowing three goals per game and are killing 80.6 percent of their opponents power plays. Jacob Markstrom has allowed 41 goals on 452 shots faced and David Rittich has allowed 20 goals on 214 shots.

The Ottawa Senators look for a win after splitting their last 10 games. The Ottawa Senators are averaging 2.6 goals per game and are scoring on 13 percent of their power play opportunities. Brady Tkachuk leads Ottawa with nine goals, Thomas Chabot has 11 assists and Drake Batherson has 52 shots on goal. Defensively, the Ottawa Senators are allowing 3.9 goals per game and are killing 75.4 percent of their opponents power plays. Matt Murray has allowed 58 goals on 499 shots faced and Marcus Hogberg has allowed 31 goals on 220 shots.

While these teams have split the first two meetings, the Senators are still leading the Flames with a 9-7 goal advantage. The Calgary Flames are the better team on paper and have been solid lately in the favorite role, but they've still lost six of their last nine games and the offense seems to come and go. The Ottawa Senators aren't a good team, but they keep finding ways to win over the last two weeks, and they're cashing some nice underdog tickets. I'll take a shot with the Senators and the plus money.