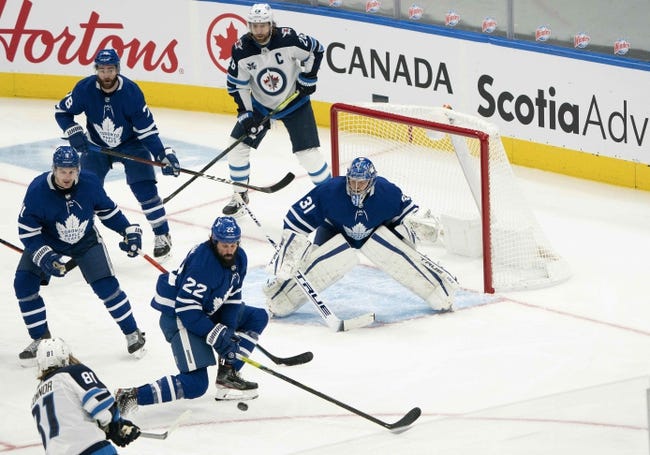 The Winnipeg Jets and the Toronto Maple Leafs meet in NHL action from Scotiabank Arena on Tuesday night.

The Winnipeg Jets will be looking to bounce back from being on the wrong end of a 7-1 rout at the hands of Montreal in their last matchup. Mark Scheifele leads the Jets in scoring with 33 points coming on team-highs of 11 goals and 22 assists while Blake Wheeler has 24 points with 7 goals and 17 assists. Nikolaj Ehlers and Kyle Connor each have 23 points with 11 goals and 12 assists while Neal Pionk has 18 points with 15 assists and Andrew Copp has 15 points with 11 assists. Connor Hellebuyck continues to be the top option in goal for Winnipeg, picking up 11 wins with a 2.73 GAA in 19 appearances this season.

The Toronto Maple Leafs will be out to rebound from a 4-2 loss and back-to-back losses to Vancouver after their last matchup. Mitch Marner leads Toronto with 34 points including 10 goals and a team-high 24 assists while Auston Matthews has a team-high 18 goals and 13 assists for his 31-point tally with a team-high 97 shots on goal this season. John Tavares has 22 points with 8 goals and 14 apples and William Nylander has his 20 points split between 10 goals and 10 assists. Morgan Rielly’s also got 19 points with 16 assists and Jason Spezza’s contributed 16 points with 11 assists. Frederik Andersen continues to be the workhorse between the pipes for Toronto, going 12-6 with a 2.68 GAA in 18 appearances for Toronto this season.

This hurts me as a Leafs fan to say, but I didn’t like how Toronto looked in that game against Vancouver, as the Leafs just folded in the 3rd period and looked lost at times. Say what you want about Winnipeg after getting blown out by Montreal, but this is still a top-tier team in that division and the fact that we keep getting as much value with the Jets as we do is almost criminal. I’ll take a shot with Winnipeg and the hefty plus money here.