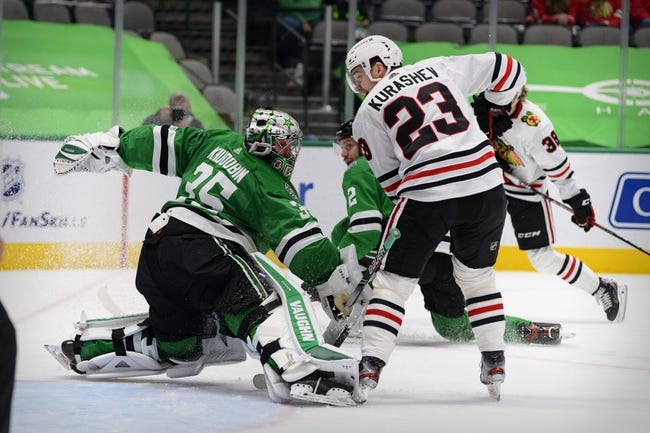 The Chicago Blackhawks and the Dallas Stars meet in NHL action from the American Airlines Center on Thursday night.

The Dallas Stars will look to pick up back-to-back wins for the first time in over a month following their win over Chicago last time out. Joe Pavelski leads the Stars in scoring with 24 points coming on a team-high 13 goals and 11 assists while John Klingberg has 16 points with 4 goals and a team-high 12 assists this season. Roope Hintz has 14 points with 6 goals and 8 assists while Denis Gurianov, Miro Heiskanen and Jason Robertson each have 13 points with Gurianov and Robertson each having 4 goals and 9 assists while Heiskanen has 11 assists this season. Jamie Benn has 12 points with 8 assists and Alex Radulov has 11 points with 8 assists as well. Anton Khudobin’s seen the bulk of the action in goal for Dallas, picking up five wins with a pair of shutouts with a 2.46 GAA in 13 games played this season while John Oettinger has 3 wins with a shutout and a 2.12 GAA in 10 games played this season.

I get why Dallas would be favored at home here, especially after looking so dominant in the last game against the Blackhawks. However, the Stars haven’t won back-to-back games since starting 4-0 this season and that was at the end of January. Chicago continues to provide value in the underdog role this season and just backing the Blackhawks this season you’re up $662. I’ll look to add to that total with the Blackhawks on the money line with the plus money here.