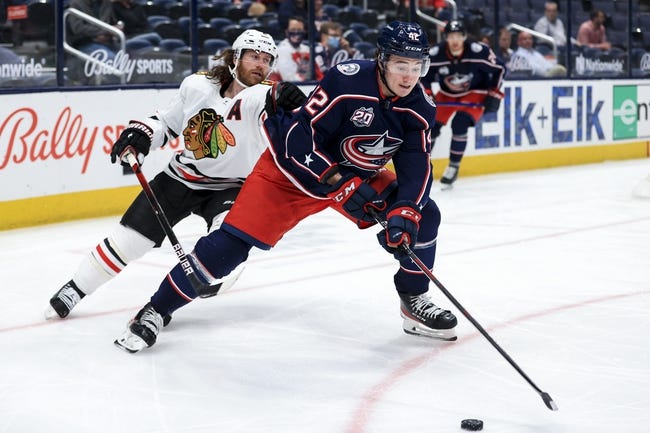 The Chicago Blackhawks and the Columbus Blue Jackets meet in NHL action from the Nationwide Arena on Monday night.

The Chicago Blackhawks will look to add to their 4-3 win over the Blue Jackets in their last matchup. Patrick Kane leads the Blackhawks in scoring with 52 points including a team-high 38 assists while Alex DeBrincat has 40 points with a team-high 21 goals and 19 assists. Dominik Kubalik has 29 points with 14 goals and 15 assists and Mattias Janmark and Pius Suter each have double-digit goal tallies as well this season for the Blackhawks. As a team, Chicago is averaging 2.8 goals per game on 29.4 shots against per game with a 24.4% success rate on the power play while allowing 3.1 goals on 33.3 shots against with a 73.3% success rate killing off penalties this season.

The Columbus Blue Jackets will look to bounce back from their loss to Chicago in their last matchup. Oliver Bjorkstrand leads Columbus in scoring with 32 points including a team-high 14 goals and 18 assists while Jack Roslovic has 28 points with a team-high 20 assists. Cam Atkinson’s got 14 goals of his own with 14 assists while Seth Jones has 17 assists this season. As a team, Columbus is averaging 2.5 goals per game on 29.1 shots per game with a 14% success rate on the power play while allowing 3.2 goals on 31.8 shots with a 78.1% success rate on the penalty kill this season.

I get the case that could be made both ways, with Columbus as the home dog while Chicago’s had the better success lately. However, offense has been tough to come by for the most part on both sides and the majority of the recent meetings between the two have been low-scoring. I could see another low-scoring affair here where we struggle to get to 5 goals let alone over the total, so give me the under here.