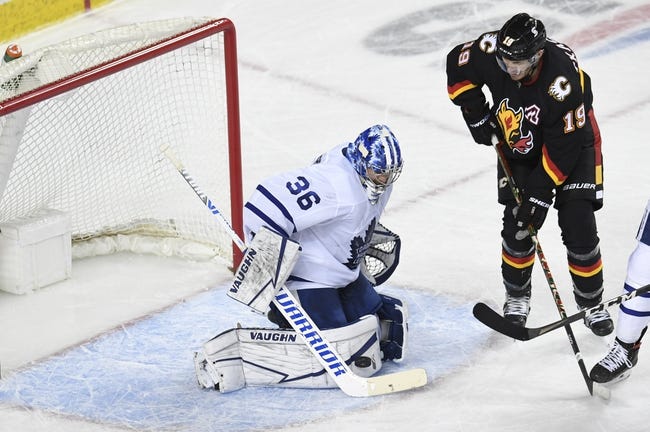 The Calgary Flames and the Toronto Maple Leafs meet in NHL action from the Scotiabank Arena on Tuesday night.

The Calgary Flames will look to build off of their 5-0 win over the Edmonton Oilers in their last matchup. Elias Lindholm leads the Flames in scoring with 34 points including a team-high 24 assists while Johnny Gaudreau has 29 points with a team-high 14 goals and Matthew Tkachuk has 28 points with 10 goals and 18 assists with a team-high 112 shots on goal this season. As a team, Calgary is averaging 2.6 goals on 29.8 shots with a 19.8% success rate on the power play while allowing 3.1 goals against on 29.7 shots against with an 80% success rate on the PK this season.

The Toronto Maple Leafs will look to rebound from a 4-2 loss to the Canadiens in their last matchup. Mitch Marner and Auston Matthews each have a team-high 53 points with Marner logging 14 goals and a team-high 39 assists while Matthews has 53 points with a team-high 32 goals, 21 assists and a team-high 161 shots on goal this season. John Tavares, Zach Hyman and William Nylander all have double-digit goal and assist tallies as well this season for the Leafs. As a team, Toronto is averaging 3.4 goals on 31.1 shots per game with a 23.3% success rate on the PP while allowing 2.6 goals on 28.5 shots against with a 78% kill rate on the PK this season.

I get the case that could be made both ways, with Montreal coming in on the back-to-back while Calgary has the rest advantage. However, this appears to be David Rittich’s first start in goal for his new team in Toronto and you know he’d love to stick it to the Calgary team that just traded him. I also like Toronto’s depth more than I do Calgary’s, so I’ll back Toronto on the bounce back in this one.