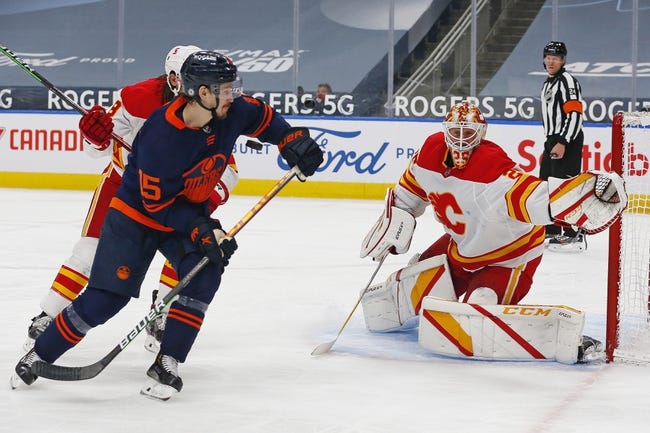 The Calgary Flames and Edmonton Oilers meet Saturday in NHL action at the Rogers Place.

The Calgary Flames look for a win after splitting their last six games. The Calgary Flames are averaging 2.6 goals per game and are scoring on 20 percent of their power play opportunities. Johnny Gaudreau leads Calgary with 17 goals, Elias Lindholm has 26 assists and Matthew Tkachuk has 129 shots on goal. Defensively, the Calgary Flames are allowing 2.9 goals per game and are killing 80.4 percent of their opponents power plays. Jacob Markstrom has allowed 96 goals on 1,014 shots faced and Artyom Zagidulin has allowed two goals on 11 shots.

The Edmonton Oilers look for a win after winning six of their last nine games. The Edmonton Oilers are averaging 3.3 goals per game and are scoring on 26.8 percent of their power play opportunities. Connor McDavid leads Edmonton with 28 goals, Leon Draisaitl has 43 assists and Ryan Nugent-Hopkins has 116 shots on goal. Defensively, the Edmonton Oilers are allowing 2.7 goals per game and are killing 79.4 percent of their opponents power plays. Mikko Koskinen has allowed 62 goals on 660 shots faced and Mike Smith has allowed 61 goals on 785 shots.

These teams have gone back and forth this season through nine meetings, so you can make a case for the Calgary Flames and the plus money. However, the Edmonton Oilers have been comfortably the better team this season and they've been absolute money in the favorite role. The favorite has also won 14 of the last 20 meetings between the Flames and Oilers. Give me the Oilers and the cheap price.