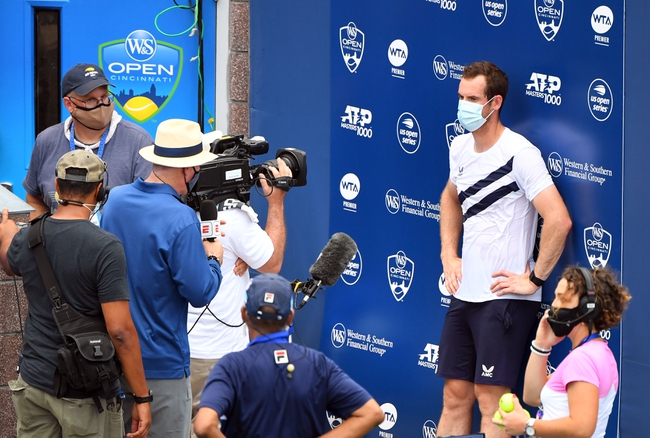 Alexander Zverev and Andy Murray meet in the second round of the 2020 tennis Western & Southern Open.

Alexander Zverev has played three exhibition matches this month at the UTS Championship, and he won all of them, with two of those victories coming against Felix Auger-Aliassime. It’s going to be interesting to see what Zverev looks like in a meaningful match under normal rules, as he hasn’t played on the tour since Acapulco back in February. This match is even more interesting considering Zverev is 0-5 in his career at the Cincinnati Masters, making it the only Masters 1000 event where he’s never won a single match. I’m sure Zverev would love to end the drought and make a run in this event. Zverev has won nine of his last 11 matches on hard court.

Andy Murray is coming off a three sets win over Frances Tiafoe that took 29 games to decide. In the victory, Murray won 78 percent of his first serve points and 65 percent of his second serve points. Murray won 72 percent of his total service points and converted on two of his five break points. Murray won a competitive first set tiebreak and then dominated the final set that took seven games to complete. Murray faced just two break points in the victory and hit eight aces. Of course, Cincinnati is no stranger to Murray, as he won this event in 2008 and 2011, and he made the final in 2016. Murray has won six of his last eight matches on hard court.

These two have played twice and Murray has won both matches in straight sets. The most recent meeting was in the 2016 Australian Open, a match Murray won in three sets. The other match took place in the 2016 Hopman Cup.

Murray is still working his way back from hip surgery and has been up and down in his play, but he looked sharp against a respectable opponent and is going to be a handful if he keeps getting free points with the serve. Zverev was off to a rocky start this season and the lack of recent reps in meaningful play could hurt him here. Throw in the fact Zverev has never won in Cincinnati, and there’s some value with the underdog here.

Give me Murray for the upset.