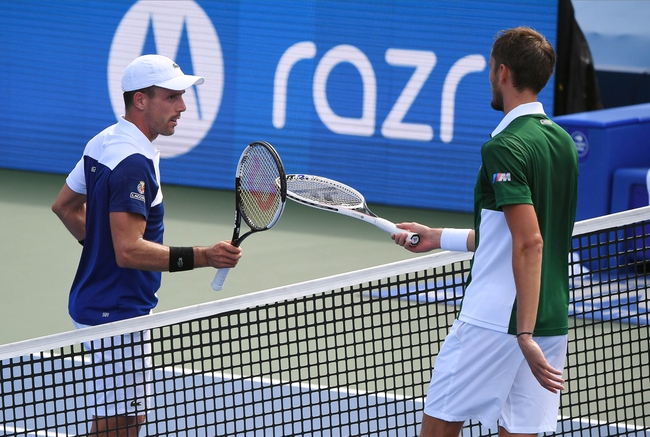 Daniil Medvedev and Federico Delbonis meet in the first round of the 2020 tennis US Open.

Daniil Medvedev is fresh off a quarterfinal trip in Cincinnati that ended with a three set loss to Roberto Bautista-Agut. Medvedev is coming off a match where he won 55 percent of his total service points and was broken five times. Before that match, Medvedev had his serve dialed in and the seven sets played should have been good enough to knockoff potential rust as he enters this grand slam with actual expectations after making the final here last year. Medvedev has lost in the first round of a grand slam twice since 2018. Medvedev has a 73 percent winning percentage at the US Open, which makes this his most successful grand slam. Medvedev has split his last eight matches on hard court.

Federico Delbonis failed to qualify for Cincinnati, so he’s played just three sets since February. Delbonis has had issues finding consistent success these last few years and he’s kind of fizzled out after showing promise earlier in career, which included wins over Roger Federer and Stan Wawrinka. Delbonis is at his best on clay court, so it’s not a surprise he’s 2-3 in his five previous first round trips at the US Open. Delbonis has three career wins over top-10 players, but none of those wins have taken place since 2016. Delbonis has lost in the first round of a grand slam in 10 of his last 13 appearances. Delbonis has lost three of his last four matches on hard court.

Delbonis has had no main tour success over the last year and he plays his best tennis on clay. Delbonis also has very few reps under his belt these last few months, so I’m concerned about this match being competitive. Medvedev should cruise in this match, winning in straight sets, assuming he's got his serve improved from what he showed in his last match. There's no reason to think Delbonis can make this competitive.

Give me Medvedev in a quick first round victory.