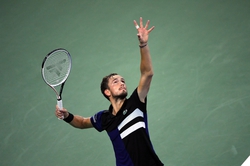 Jeffrey John Wolf vs. Daniil Medvedev - 2020 US Open Third Round

Daniil Medvedev meets home crowd favourite, Jeffrey John Wolf, in the third round of the 2020 US Open. Will Medvedev continue to build on his form, or will the American cause a shocking upset?

Daniil Medvedev has been superb here at the US Open after a disappointing week at the Cincinnati Masters. Medvedev has not lost a set here and has finished both of his prior matches quickly and easily. Medvedev is on a mission to prove that his performance here at the US Open last year was not a fluke and that he can maintain that consistency level. Medvedev now has an even better chance with the likes of Tsitsioas being knocked out of the tournament yesterday. If Medvedev stays on top of his game, and maintains his concentration throughout matches, he is probably the only man who can win this tournament other than Djokovic and Thiem.

Jeffrey John Wolf will have his hands full in this third round match against Daniil Medvedev. Although Wolf has been extremely solid in his opening round matches, he now faces a different beast. Wolf has the skillset to bother Medvedev, but he does not have the skillset to take this match in 3 sets, let alone the distance. Wolf will have to hope for a miracle such as an absolutely terrible Medvedev performance or a retirement if he is to go to the fourth round.

This will be the first meeting between both players and it is going to be a swift Daniil Medvedev victory. Medvedev is the better player, has more experience, has had success on the courts reaching the final here at the US Open last year, and is determined to show everyone that he is here to stay. Jeffrey John Wolf is a solid talented player, but he is not a player with the game level to compete with the top 10 in the world. I expect Medvedev to come out, serve superbly, be consistent in the baseline rallies and cruise comfortably to the fourth round. Take Medvedev to win in straight sets as he will not allow Wolf to get anything from this match.