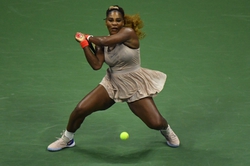 Serena Williams begins her quest for her 24th Single's Grand Slam title here in Paris at the French Open as she meets Kristie Ahn in the first round on Monday, September 28th 2020. Will Williams be feeling at her best after issues with her ACL over the last few weeks, or is an upset on the cards?

Kristie Ahn is not a very well know player in the world of Women's tennis and she will have to either hope to play the best tennis of her life here in the first round, of hope that Serena Williams is not physically fit enough to compete. Ahn has however got the potential to become one of the game's most promising prospects in the future. Ahn has not got a big serve, but she reminds me of the likes of Roberto Bautista Agut as she is a very strong baseline rallier. Ahn will try and play 15-20 rallies for most of her points and draw out the errors from her opponents. Can Ahn do this to the legend that is Serena Williams?

Serena Williams had a great US Open, however, she just was two steps shy of capturing her 24th record equalling Grand Slam title. Williams lost to Victoria Azarenka in the semifinals of the US Open and after that match she withdrew from the Rome Masters due to concerns with her ACL. I would not expect Serena Williams to show up here at the French Open if she was not fit enough to play as she wants to preserve her health to the best about her abilities with her age and her limited playing time. Serena Williams will come out here ready and determined to cruise through the pack.

This is going to be the second meeting between both players and it is a rematch of a few weeks ago at the US Open. Ahn took the game to Serena Williams in the first set, but still lost it 7-5. Serena Williams looks at these opening round matches as a way to train herself for the future matches and therefore there is opportunity to keep the match tight, however, she will not lose it. Serena Williams will come out here and dominate. Ahn needs to hope for something incredible to happen if she is to win.