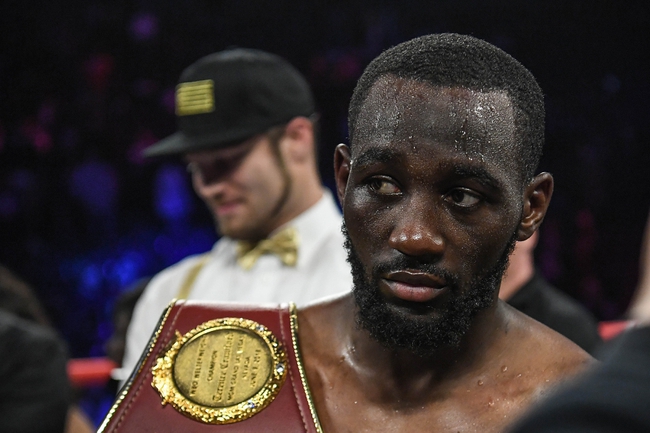 Terence Crawford and Kell Brook fight in a boxing match Saturday at the MGM Grand Conference Center for the WBO welterweight title.

Terence Crawford enters this fight with a 36-0 record that includes 27 knockouts. This will be Crawford’s third fight since 2019, and he’s coming off a December win over Egidijus Kavaliauskas. Crawford is coming off a ninth round knockout in a bout he controlled from start to finish and ended up dropping his opponent three times. Crawford now looks to defend his belt for the fourth time and these 11 months off is quite a long time for the champ, as he’s used to fighting two or three times a year. Crawford is a 33-year-old southpaw who stands at 5’8” and has a 74-inch reach. Crawford is one of the best technical fighters in the sport, as he’s polished defensively with great head had movement and shoulder rolls, and he allows very few rounds for his opponent to get comfortable. Combine Crawford’s defense with his ability to fight out of either stance, he’s very tough to figure out over the course of 12 rounds. Crawford is a terrific counterpuncher and has a very strong right hand. Crawford is an underrated power puncher and has finished each of his last seven fights. Many consider Bud to be the best pound for pound boxer in the sport. This will be Crawford’s eighth career fight in Nevada.

Kell Brook enters this fight with a 39-2 record that includes 27 knockouts. Brook has won 10 of his last 12 fights and is coming off a February win over Mark Deluca. Brook has won three straight fights since his loss to Errol Spence Jr., and he’s coming off a seventh round knockout where he dropped his opponent early and finished him with a left hook. While the victories should do wonders for Brook’s confidence, it’s a fight like this that will determine if Special K is back to being one of the premier names in the sport. Brook is a 34-year-old British boxer who stands at 5’9” and has a 69-inch reach with an orthodox stance. When he was at the top of his game, Brook relied on athleticism and a high boxing IQ. Brook isn’t exactly a knockout artist, but he delivers accurate punches and is a successful counter puncher. Brook can comfortably fight inside or outside and that makes it difficult for his opponent to get comfortable and find a rhythm. Brook has finished five of his last six fights, but it’s his last two bouts against notable names where he was the one being stopped, so there’s still some questions if he’s built for a fight of this stage. This will be Brook’s third career fight in the United States.

This would have been a cool fight maybe five years ago and it should still do well ratings wise because of the names. The issue here is Brook raised a lot of eyebrows after his bouts against Gennady Golovkin and Spence, and he’s kind of fallen off the map since. Crawford has a massive reach advantage, has the power edge and it feels like this is a fight where he can walk Brook down, back him into a corner and go to work in the middle rounds. Brook is a tough dude who wasn’t afraid to fight GGG in his prime and at one point he was one of the more respectable fighters in the sport. Brook also has a solid jab and is a big fighter for this weightclass who can tag Crawford if he’s caught slipping. However, this isn’t the fight that trips up Crawford.

Hopefully it’s a competitive bout, but I still have Crawford by stoppage, likely in the seventh or eighth round.