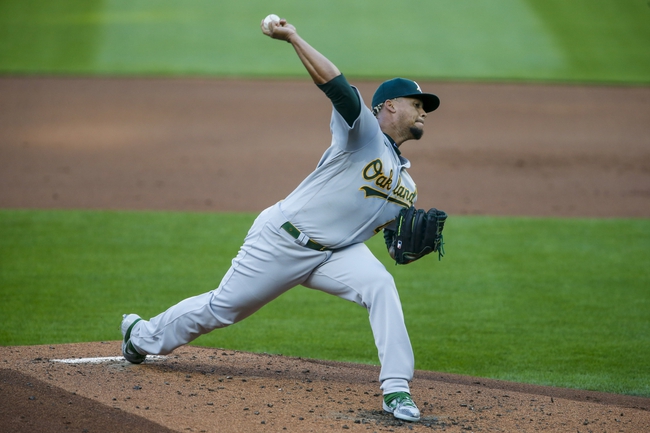 TV: FSAZ, NBCSCA Stream the MLB Game of the Day all season on ESPN+. Sign up now!

The Oakland A’s and the Arizona Diamondbacks meet in MLB action from Chase Field on Tuesday night.

The Oakland A’s will try to rebound from a 4-3 loss to the D-Backs on Monday. Robbie Grossman had a solo home run and Matt Chapman added an RBI while Austin Allen went 2 for 3 with a double. Marcus Semien and Vimael Machin each had base hits as well, as the A’s had just six hits as a team in the loss. Chris Bassitt allowed three runs on five hits while striking out three over 5.1 innings of work, not factoring in the decision. Joakim Soria took the loss in relief, falling to 0-1 on the year. Frankie Montas will start here and is 2-1 with a 1.57 ERA and 22 strikeouts this season. This will be Montas’ second career start against Arizona.

The Arizona Diamondbacks will try ot build off of their win over Oakland on Monday. David Peralta went 3 for 5 with a home run, a double and two RBIs including the game-winning walk-off RBI single. Eduardo Escobar had a double and an RBI while Carson Kelly added an RBI as well to round out Arizona’s scoring as a team in the win and Nick Ahmed added a double of his own as well, going 2 for 3 at the dish. Christian Walker, Starling Marte and Ketel Marte each had a base hit to cap off Arizona’s offense as a team in the victory. Zac Gallen threw seven innings, allowing one run on three hits while striking out eight, not factoring in the decision. Stefan Crichton got the win in relief to improve to 2-0. Luke Weaver will start here and is 0-3 with an 11.85 ERA and 17 strikeouts this season. This will be Weaver’s second career start against Oakland.

The Diamondbacks are on fire right now, but Luke Weaver has been the tall glass of water that’s primed and ready to put that fire out. For whatever reason, Weaver’s been batted around like a pinata this year, failing to get to the 5th inning in any of his starts, allowing 18 runs in 13.2 innings so far this season. Oakland’s played well in their own right and were so close to completing the comeback on Monday, and while back issues can flare up like the ones Montas has had, I think he can do enough and the bats can provide eough support to get a win here. Give me the A’s and lay the juice in this one.