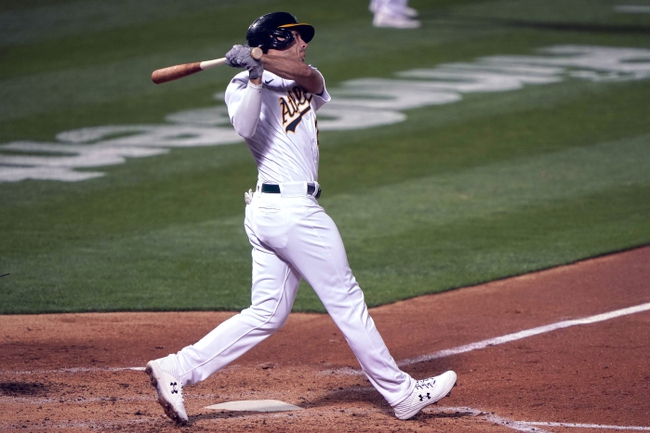 TV: MLBN, NBCSCA, NBCSBA Stream the MLB Game of the Day all season on ESPN+. Sign up now!

The San Francisco Giants and the Oakland A’s meet in MLB action from Ring Central Coliseum on Saturday.

The San Francisco Giants will be looking for a bounce back after a 6-0 loss to the A’s on Friday. Brandon Crawford had a double while Darin Ruf and Joey Bart each had a base hit as well as the Giants had just three hits as a team in the losing effort with the rest of the squad batting 0 for 19 with 6 strikeouts. Logan Webb took the loss after allowing all six runs on six hits over 3.1 innings of work in the loss. Kevin Gausman is expected to start here and is 3-2 with a 4.05 ERA and 62 strikeouts this season. In his career, Gausman is 1-2 with a 3.13 ERA and 35 strikeouts against Oakland.

The Oakland A’s will hope to keep the momentum going after clinching another trip to the postseason after Friday’s win. Matt Olson had a home run and three RBIs while Jake Lamb, Marcus Semien and Tommy La Stella each had an RBI as well to round out the scoring in the winning effort for the A’s. Tony Kemp also added a base hit as well as the A’s cranked out just six hits as a team in the winning effort. Chris Bassitt got the win to improve to 5-2 on the year after throwing 6.2 shutout innings, giving up just three hits while striking out seven in the victory. Jesus Luzardo will start here and is 2-2 with a 4.32 ERA and 52 strikeouts this season. This will be Luzardo’s second career start against San Francisco.

Oakland handily took game one, but I’m concerned there will be a bit of a hangover here. Luzardo hasn’t been the most reliable arm for the A’s in that rotation, and he allowed six runs in just 3.1 innings in his lone start against San Francisco this season. The Giants still need wins to help solidify a playoff spot, as the Giants are in the thick of the race right now, and while Gausman hasn’t been my favorite pitchers in past years, he’s put together a solid campaign and has allowed two runs or less in each of his last three starts. I’ll take a shot with the Giants and the plus money in this one.