TV: Bally Sports Southwest, SNET, SNET-1 Stream the MLB Game of the Day all season on ESPN+. Sign up now!

The Toronto Blue Jays and the Texas Rangers meet in MLB action from globe Life Field on Wednesday night.

The Toronto Blue Jays will look to rebound from a 7-4 loss to Texas last time out. Bo Bichette led the Jays with a pair of home runs, going 2 for 4 at the dish with a pair of solo blasts while Randal Grichuk went 2 for 3 with an RBI as well. Teoscar Hernandez and Lourdes Gurriel Jr. each have a base hit to make up the offense for Toronto as the Jays had just six hits as a team in the losing effort. Tanner Roark took the loss, falling to 0-1 after allowing five runs on six hits with a pair of strikeouts over three innings of work. Hyun-Jin Ryu will start here and is 0-0 with a 3.38 ERA and 5 strikeouts this season. This will be Ryu’s first career start against Texas.

The Texas Rangers will look to build on their win over Toronto from Tuesday. Nate Lowe led the way with a pair of home runs and four RBIs while Ronald Guzman and Jonah Helm each had a solo home run. Brock Holt added an RBI as well to cap off Texas’ offense as a team in the win while Nick Solak and David Dahl each had two hits and Isiah Kiner-Falefa added a base knock as well. Dane Dunning got the win after giving up one run on three hits with six strikeouts over five innings of work. Ian Kennedy closed out the 9th for the save. Kyle Gibson will start here and is 0-0 with a 135.00 ERA and 1 strikeout this season. In his career, Gibson is 4-1 with a 4.61 ERA and 48 strikeouts against Toronto.

I get the case that could be made both ways here, as Toronto has the better starter here, but Texas has home field and bounced back nicely on Tuesday. With that said, I trust Ryu a whole heck of a lot more than I do Kyle Gibson and I’m chalking Tuesday up to Tanner Roark being on the mound and not being a reliable arm for the Jays as the team would think he is. I’ll back Toronto and I think Toronto gets revenge in a big way so I’ll back Toronto -1.5 here. 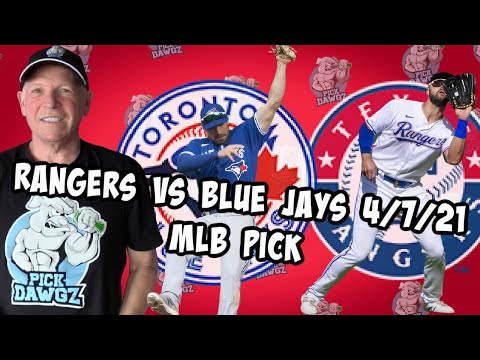