TV: Bally Sports Arizona, NBCSCA, MLBN Stream the MLB Game of the Day all season on ESPN+. Sign up now!

The Oakland A’s and the Arizona Diamondbacks meet in MLB action from Chase Field on Tuesday.

The Oakland A’s will look to build on their 9-5 win over Arizona in their last matchup. Jed Lowrie led the charge by going 2 for 4 with a double and three RBIs while Matt Chapman went 3 for 5 with a home run and two RBIs. \Sean Murphy had a pair of doubles and an RBI going 2 for 4at the dish while Elvis Andrus and Matt Olson each had an RBI as well. Stephen Piscotty and Mark Canha each had a double while Ramon Laureano added a pair of hits as well to finish off Oakland’s offense as a team in the win. Chris Bassitt got the win to improve to 1-2 on the year after allowing two runs on two hits with four strikeouts over five innings of work. Jesus Luzardo will start here and is 0-1 with a 6.10 ERA and 14 strikeouts this season. This will be Luzardo’s second career start against Arizona.

The Arizona Diamondbacks will look to rebound following Monday’s loss to the A’s. Asdrubal Cabrera had a double and two RBIs while Kole Calhoun went 3 for 4 with an RBI. David Peralta and Nick Ahmed each had RBIs as well to cap off Arizona’s scoring as a team in the loss while Josh VanMeter had a triple and Tim Locastro added a base knock of his own as Arizona had seven hits as a team in the loss. Madison Bumgarner took the loss, falling to 0-2 on the year after allowing six runs on seven hits while striking out five over 4.2 innings of work. Zac Gallen will make his season debut here and was 3-2 with a 2.75 ERA and 82 strikeouts last season. This will be Gallen’s second career start against Oakland.

I’m making this pick on the assumption that Zac Gallen is starting for Arizona, and I’ll update it if I hear otherwise, but I’m leaning towards Arizona here. Jesus Luzardo helped Oakland get an impressive first win of the season against the Dodgers, but there hasn’t been much else for Oakland to write home about as the A’s have been all bark and no bite to start the year. Arizona has had ups and downs, but Gallen was one of the D-Backs bright spots last year and I think he’ll be itching to get going here after having his spring cut short. I’ll side with the D-Backs at home here. 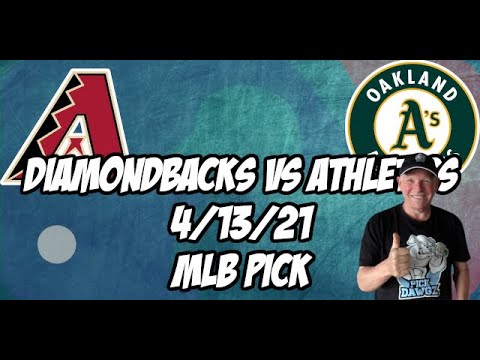