TV: TSN, SNLA, MARQ Stream the MLB Game of the Day all season on ESPN+. Sign up now!

The Los Angeles Dodgers need a win after losing five of their last six games. The Dodgers have scored 20 runs in their last three games and three or less runs in four of their last eight games. The Dodgers have lost seven straight games when scoring three or less runs. Justin Turner leads the Dodgers with 35 hits and 22 RBI while Corey Seager and Mookie Betts have combined for 55 hits and 24 RBI. Walker Buehler gets the ball, and he is 1-0 with a 3.16 ERA and 31 strikeouts this season. Buehler is 0-1 with a 5.27 ERA and seven strikeouts in his career against the Cubs.

The Chicago Cubs look for a win after splitting their last eight games. The Cubs have scored 23 runs in their last three games and four or more runs in five of their last six games. The Cubs have won seven of their last 11 games when scoring four or more runs. Kris Bryant leads the Cubs with 33 hits and 22 RBI while Anthony Rizzo and Javier Baez have combined for 48 hits and 34 RBI. Adbert Alzolay gets the ball, and he is 1-2 with a 4.71 ERA and 23 strikeouts this season. This will be Alzolay’s first career game against the Dodgers.

The Los Angeles Dodgers are going to be favored in pretty much every game because of who they are, and they have the pitching edge in this contest as well. However, the Dodgers have been on the struggle bus these last couple of weeks and have killed bettors with these failed tickets and heavy juice. And don't look now, but the Chicago Cubs are getting their offense together and are starting to string together some nice wins. Give me the big plus money with the Cubs. 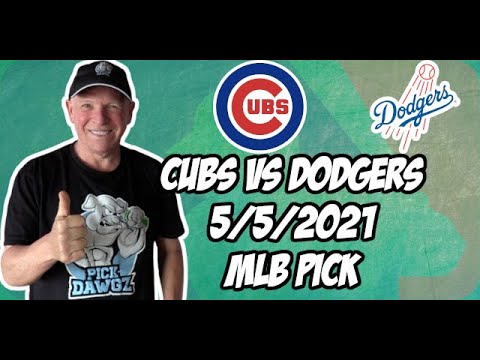