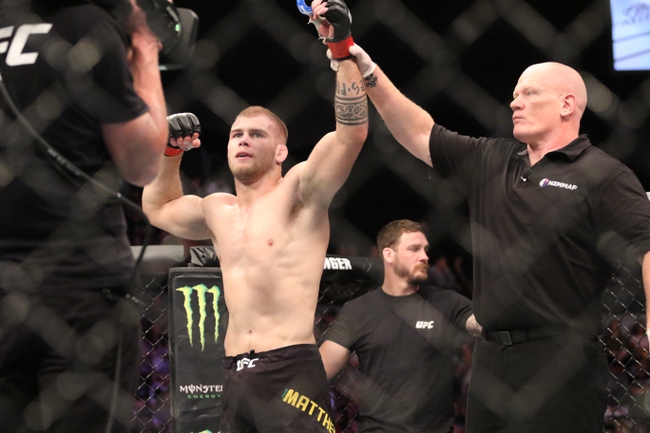 Diego Sanchez and Jake Matthews fight Saturday night during UFC 253 at the Flash Forum on PPV.

Diego Sanchez enters this fight with a 30-12 record and has won 43 percent of his fights by decision. Sanchez has split his last 10 fights and is coming off a February win over Michel Pereira. Sanchez is averaging 2.73 significant strikes per minute with an accuracy percentage of 38 percent. Sanchez is averaging 1.57 takedowns with an accuracy percentage of 24 percent. Sanchez is coming off a DQ victory at UFC Fight Night 167, a fight he was probably losing on the scorecards before the illegal knee. Sanchez will take the victory however he can get it and he’s now split his last 20 UFC fights. Sanchez has a black belt in Gaidojutsu and BJJ, and he’s a fighter with a brawler style who will stand in the pocket and trade until somebody falls. Sanchez also has good scrambling skills, and he’s produced six submission victories while never being submitted himself. At almost 39 years old, Sanchez has seen everything to see in the octagon, and his grappling and wrestling makes him a tough matchup in this division. This will be Sanchez’s first career fight in Abu Dhabi.

Jake Matthews enters this fight with a 16-4 record and has won 44 percent of his fights by submission. Matthews has won five of his last six fights and is coming off a February win over Emil Weber Meek. Matthews is averaging 2.98 significant strikes per minute with an accuracy percentage of 46 percent. Matthews is averaging 2.20 takedowns with an accuracy percentage of 41 percent. Matthews is coming off a decision victory at UFC Fight Night 168 where he landed 71 total strikes and produced four takedowns. Matthews is now 9-4 under the UFC banner and he’s seen five of his last seven fights end in decision. Matthews is a tough Australian fighter with a black belt in BJJ and seven of his 16 career victories have ended in submission. Matthews is a lengthy fighter who is very creative on the canvas in terms of changing positions, and he’s executed the triangle choke twice in his career. Matthews has also been highly effective with his takedowns and has great ground and pound once he gains top position. At only 26 years old, Matthews really has a chance to start chipping away in these rankings and becoming a much bigger face in the division. This will be Matthews’ first career fight in Abu Dhabi.

This line is 100 percent disrespectful to a veteran like Sanchez who has been through the wars and had a lot of success in the UFC. Matthews probably has the edge here given his balanced attack and the youth being on his side, but this line is nuts. With all that said, Matthews should win this fight and as a way to avoid the insane price, I’m going to predict a decision. Sanchez is going the distance a lot lately and I don’t see Matthews power giving him that much of an issue.