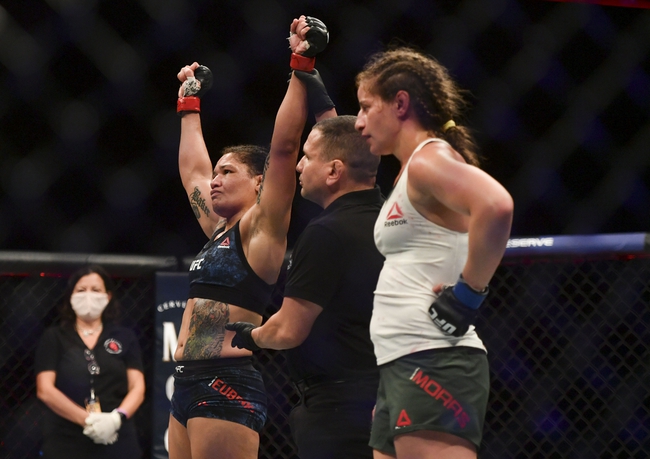 Ketlen Vieira and Sijara Eubanks fight Saturday night during UFC 253 at the Flash Forum on PPV.

Ketlen Vieira enters this fight with a 10-1 record and has won 40 percent of her fights by submission. Vieira has won five of her last six fights, and she’s coming off a December loss to Irene Aldana. Vieira is averaging 2.74 significant strikes per minute with an accuracy percentage of 35 percent. Vieira is averaging 2.03 takedowns with an accuracy percentage of 57 percent. Vieira is coming off her first career loss at UFC 245 where she was knocked out in the first round. It’s always interesting to see how fighters respond from their first career loss and it’s going to be no different for the 29-year-old Brazilian. Vieira is a black belt in BJJ and Judo, and she uses kickboxing and wrestling a lot in her fights. Vieira is most effective in the clinch or on the ground, and she usually gets the fight where she wants it on her terms. Vieira has won all four of her career decisions and she has a an extremely high takedown defense percentage. This will be Vieira’s first career fight in Abu Dhabi.

Sijara Eubanks enters this fight with a 6-4 record and has won 67 percent of her fights by decision. Eubanks has won four of her last six fights and is coming off a September win over Julia Avila. Eubanks is averaging 4.71 significant strikes per minute with an accuracy percentage of 42 percent. Eubanks is averaging 2.17 takedowns with an accuracy percentage of 48 percent. Eubanks is coming off a decision victory at UFC Fight Night 177 where she landed 107 total strikes and produced three takedowns. Eubanks is now 4-2 under the UFC banner and will look to pick up the rare two wins in the same month. A victory here and Eubanks puts herself in a completely different light in the Bantamweight division. Eubanks is a black belt in BJJ and is highly decorated in the field where she has won several medals in the World Jiu-Jitsu Championship. Eubanks has had great takedown success at the UFC level and has been a fairly decent striker on her feet with above-average defense. Some would consider Eubanks a bit of a points fighter, as eight of her 10 fights have ended in decisions and she’s rarely in a position to finish the bout. Eubanks has good cardio and is in control of most of her fights in terms of pace. This will be Eubanks’ first career fight in Abu Dhabi.

This is a tough spot for Eubanks, as it’s an extremely quick turnaround with her replacing the injured Marion Reneau. We’re talking about two fights in two weeks, and she just went three rounds in her last bout. With that said, this is a fight Eubanks can win, as she’s fighting a grappler and ground fighter and won’t take a ton of damage in terms of striking. Eubanks and her high level BJJ gives her a chance in this fight, and we have to factor in Vieira not fighting in nearly a year and is coming off her first career loss, which happened to be a knockout.

I’ll take a shot with Eubanks and the plus money.