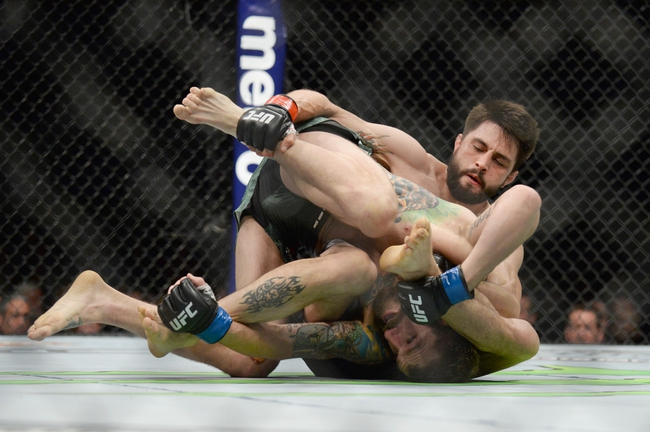 Carlos Condit and Court McGee fight Saturday night during UFC on ESPN 16 at the Flash Forum.

Carlos Condit enters this fight with a 30-13 record and has won 50 percent of his fights by knockout. Condit has lost each of his last five fights and is coming off a December (2018) loss to Michael Chiesa. Condit is averaging 3.56 significant strikes per minute with an accuracy percentage of 39 percent. Condit is averaging 0.58 takedowns with an accuracy percentage of 55 percent. Condit hasn’t been in the octagon in nearly two years, and we haven’t seen him win a fight since beating Thiago Alves five years ago at UFC Fight Night 67. Condit was supposed to fight at UFC on ESPN 7, but he was forced to pull out due to a detached retina. Bottom line is we don’t know what to expect from Condit when he steps in the octagon. When in good form, Condit is one of the better finishers in the sport, as only two of his 30 wins have come by decision and he has true one punch knockout power thanks to his boxing background. Condit also has a kickboxing background, is really athletic and has the stamina to still be effective in the later rounds despite losing each of his last four decisions. While he comes from a striking background and is more comfortable on his feet, Condit is a brown belt in BJJ while also having 13 submission victories and his grappling has improved over the years. Condit is a balanced, powerful fighter, it’s just about getting that confidence back and snapping out of this funk. This will be Condit’s first career fight in Abu Dhabi.

Court McGee enters this fight with a 19-9 record and is winning 47 percent of his fights by decision. McGee has lost six of his last nine fights and is coming off an October (2019) loss to Sean Brady. McGee is averaging 4.86 significant strikes per minute with an accuracy percentage of 35 percent. McGee is averaging 1.71 takedowns with an accuracy percentage of 21 percent. McGee is coming off a decision loss at UFC on ESPN 6 where he landed 128 total strikes, 36 percent of his significant strikes and failed on all six takedown attempts. McGee hasn’t won a fight since UFC Fight Night 138, and he hopes to avoid three straight losses for the first time in his career. McGee has a boxing, karate and wrestling background, and he’s a purple belt in BJJ and a black belt in Kajukenbo. McGee is a volume striker who has five knockout victories and also has a pair of submissions via punches. McGee is a decent takedown defender, but he doesn’t have the best takedown success and is usually at his best on his feet. McGee has seen 17 of his 28 career fights end in decisions, so the finish ability isn’t all there. This will be McGee’s first career fight in Abu Dhabi.

This is a tough fight to predict given that neither fighter has looked good over the years and they’re both in terrible form. However, if there was ever a fight for Condit to get out of this funk and finally get in the win column, this would be it. McGee isn’t the most accurate striker in the world, he doesn’t produce takedowns well and he’s giving up some size here as well. Condit should be able to dictate the pace and land some quality shots on McGee.

I’ll take Condit and the plus money, as I’m not laying juice with either of these fighters.