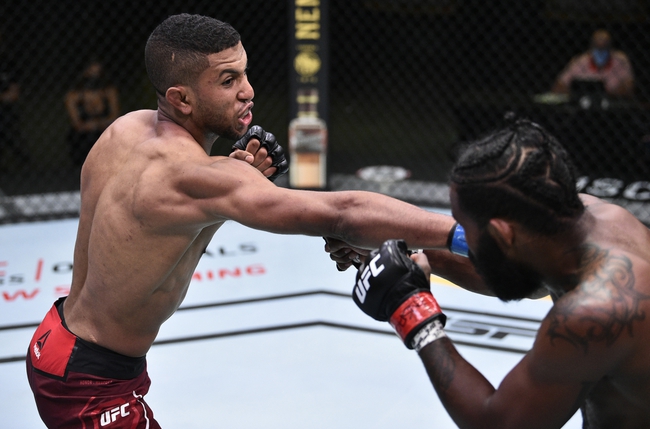 Youssef Zalal enters this fight with a 10-2 record and has won 50 percent of his fights by submission. Zalal has won six of his last eight fights and is coming off an August win over Peter Barrett. Zalal is averaging 3.20 significant strikes per minute with an accuracy percentage of 55 percent. Zalal is averaging three takedowns with an accuracy percentage of 47 percent. Zalal is coming off a decision victory at UFC Fight Night 174 where he landed 82 total strikes, 58 percent of his significant strikes and produced three takedowns. Zalal is now 3-0 under the UFC banner and is looking for his fourth victory this year. Zalal is an athletic fighter who is dangerous on the feet due to his effective jab and his ability to throw a variety of kicks, which includes a flying knee knockout last year around this time. Zalal is also very dangerous on the canvas where he can attack off his back and his lengthy frame has helped him produce five submission victories. Zalal has been very effective with his takedowns on the UFC level and two of his career submission victories have come by the brabo choke.

llia Topuria enters this fight with a 8-0 record and has won 88 percent of his fights by submission. This will be Topuria’s first fight this years, and he’s coming off a November win over Stephen Goncalves. Topuria will make his UFC debut in this bout, as he replaces Seung Woo Choi who withdrew from the fight. Topuria is a 23-year-old from Spain who last fought in Brave CF 29 and got his first career knockout in the first round. Topuria has improved his striking over the years and his first knockout will give him even more confidence, but he’s  grappler at heart who has terrific wrestling. Topuria times his takedowns well and once he gets his opponent on the canvas, he’s a nightmare with his transitions and keeping the fight there. Topuria has seven career submission victories and all but one of his fight overall have been decided in the first round. Two of Topuria’s fights have been decided by the guillotine choke.

This is a dangerous fight, as Topuria has the grappling and the wrestling to give a lot of people problems in this division. However, this is asking a lot of the young Topuria, as he’s taking this fight on short notice and has to go through a lot in terms of quarantine regulations just to make it to Fight Island. Zalal is the more seasoned fighter at this stage, has a clear edge on the feet and is dangerous on the ground himself.

Zalal and the reasonable price here is likely the way to go.

The pick in this article is the opinion of the writer, not a Sports Chat Place site consensus.
Previous Pick
UFC on ESPN 16: Irene Aldana vs. Holly Holm - MMA Picks, Predictions
Next Pick
UFC Fight Night 179: Alan Baudot vs. Tom Aspinall Picks, Odds, and Predictions